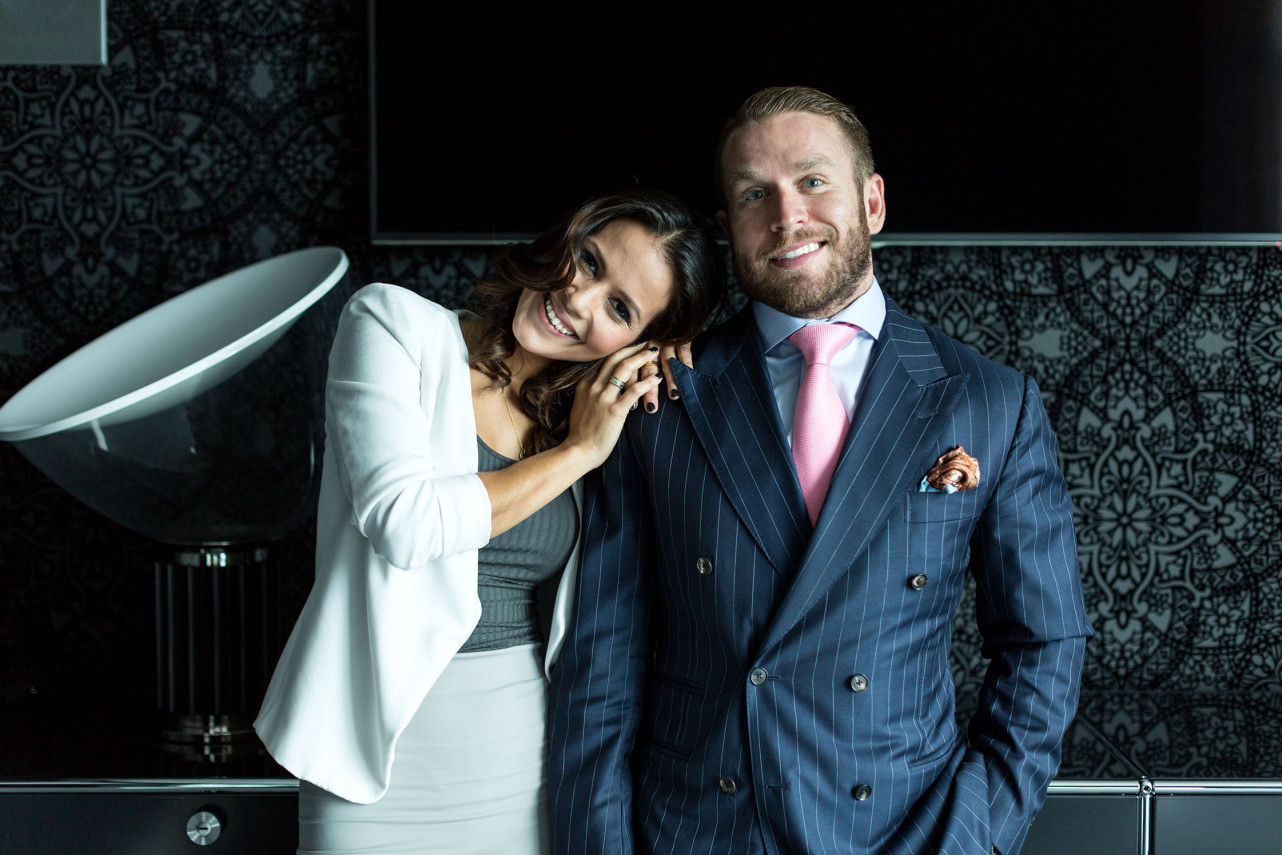 Attorney Ryan Rudd is a man who pays attention to detail. He appreciates a good tie, or an interesting pocket square. His shoe collection alone – which numbers over 80 pairs – is a prismatic patchwork of color, patterns, print, and particularity. (One, which he singles out, features an embroidered skull complete with jeweled crown.) Truth be told, hours could easily be lost in his closet alone. But the rest of Ryan’s home – a two-bedroom, two-and-a-half bathroom condominium in Orlando’s Old Hollywood-inspired Star Tower – is further proof of his passion for thoughtful design. The space, which he shares with his fiancee, Natasha Romero, a marketing director for medical facilities, is a carefully considered synthesis of precious and practical – it’s contemporary without feeling cold; stylish without sacrificing simplicity. What’s more, it serves as a much-needed respite for the hard-working pair, whose demanding days at the office call for the comforts of a restful retreat. “I really feel like I have no worries here,” says Ryan, an Orlando resident for over ten years. “Everything is just the way I like it.” He stops a moment. “This is home,” he continues. “I’m glad it’s a place I can say I’m proud of.” 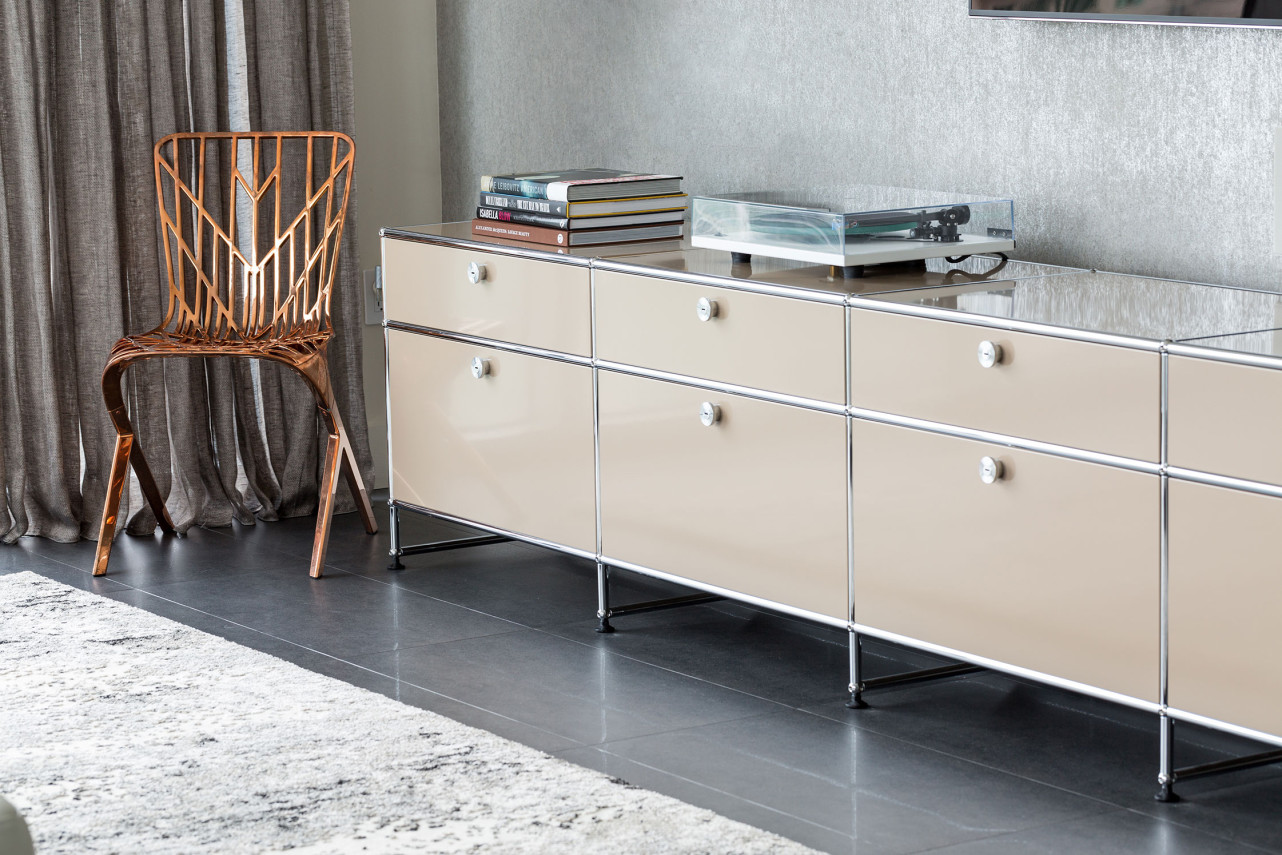 “USM Modular Furniture just works well with what I like. It’s clean, modern. It comes in great colors that you can mix and match. They’re just very unique pieces of furniture.” 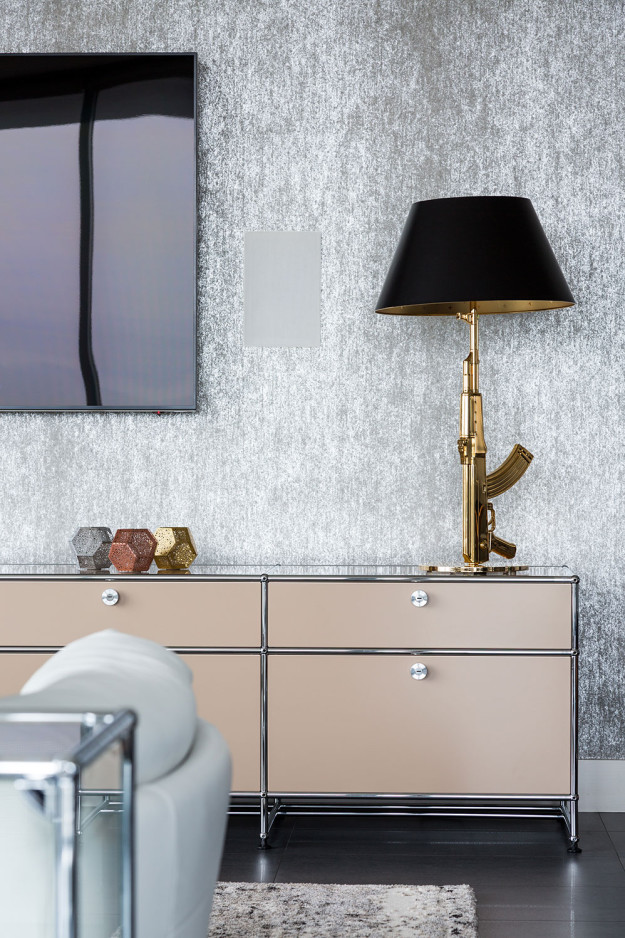 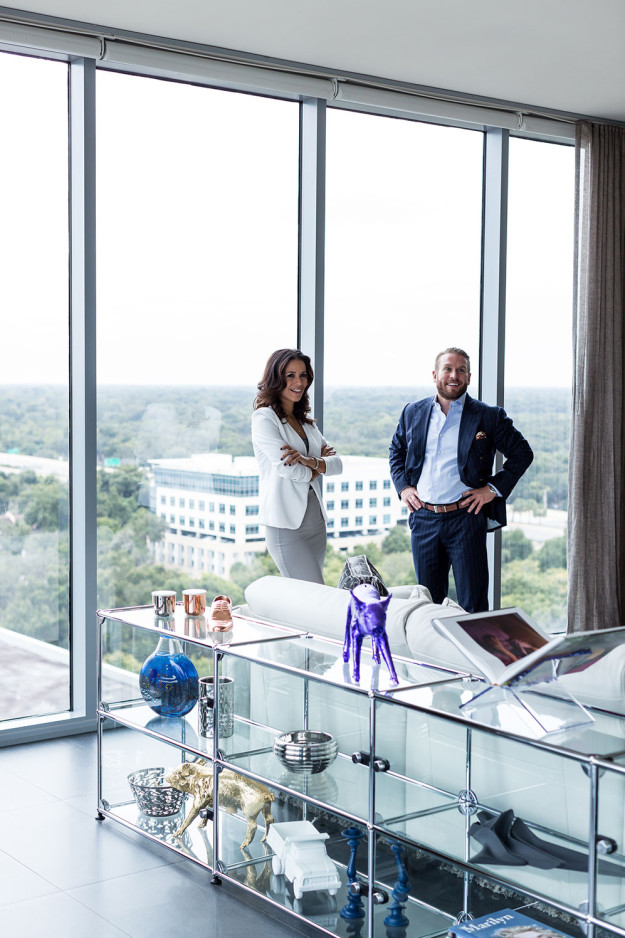 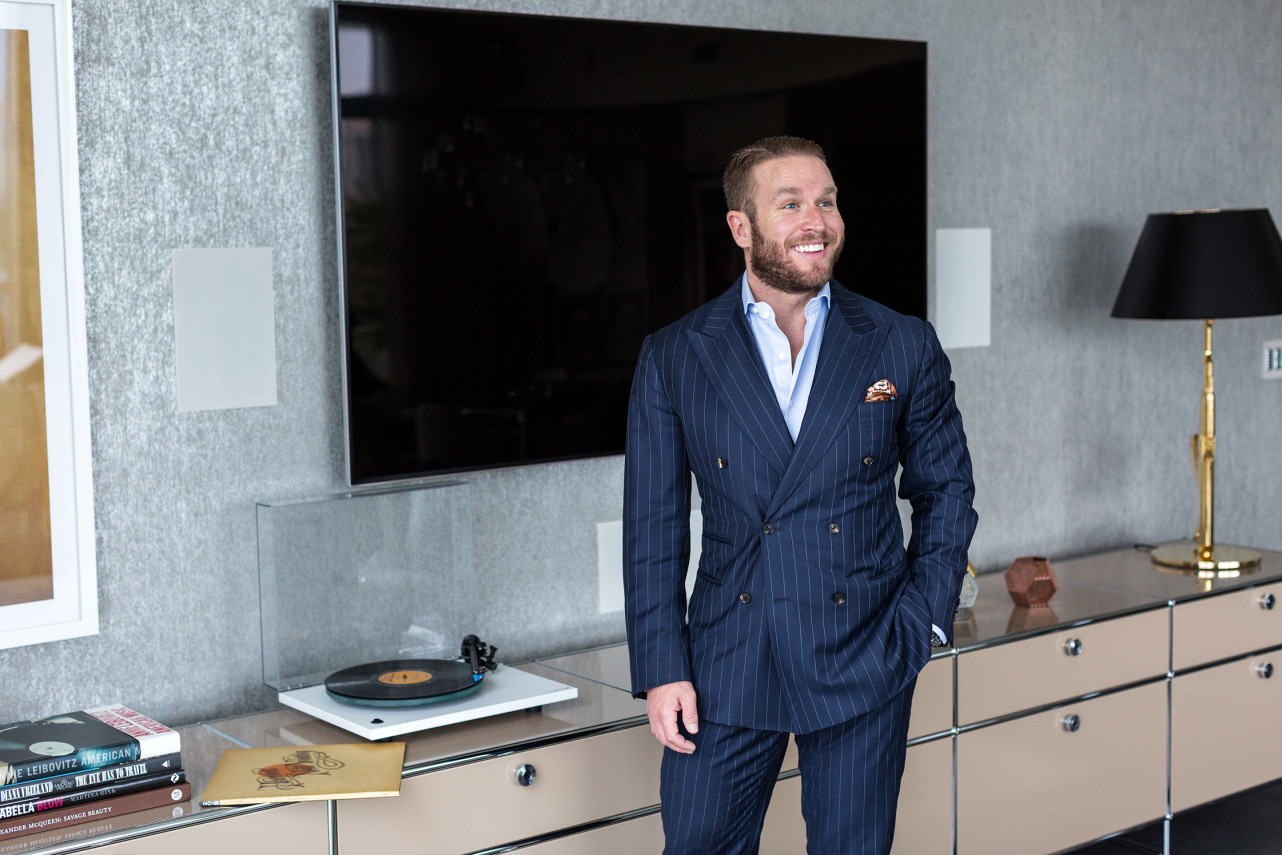 Ryan and Natasha’s home is pure comfort. Everything – from the lights to the music to the air-conditioning – is controlled by the touch of a button.

You’ve lived in Orlando since 2004. It’s a city we don’t hear nearly as much about as say, Miami. What do you love about it?

I love Orlando for many reasons. One is definitely the diversity. There are people here from all over the world. Also, its central location in Florida is extremely convenient – you can get to Miami or Jacksonville very quickly if you need to. And there’s just so much going on on a day-to-day basis: we have great sports teams, restaurants, performing arts centers. We have Disney World, which is one of the largest tourist destinations in the country, if not the world. There’s a lot that makes Orlando a desirable place to live. It may not be as popular a destination as Miami, but it’s definitely got a lot to offer.

It seems you get to see it all from your apartment too – what a view. How long have you been living here?

For just about two years. We’re located in an area called Thornton Park, which is in Downtown Orlando near Lake Eola. We’re facing East, so our windows overlook the treetops. We love the view – it’s a little like looking out onto Central Park. As for the building, it’s called the Star Tower. It has a real Old Hollywood quality – very boutique-like. True to its name, it has pictures on every floor of different actors, actresses and singers. That, coupled with its design and layout, gives the Tower a very old-school Hollywood feel. My space, though, I think has a more modern atmosphere: the furniture, the design choices, everything. 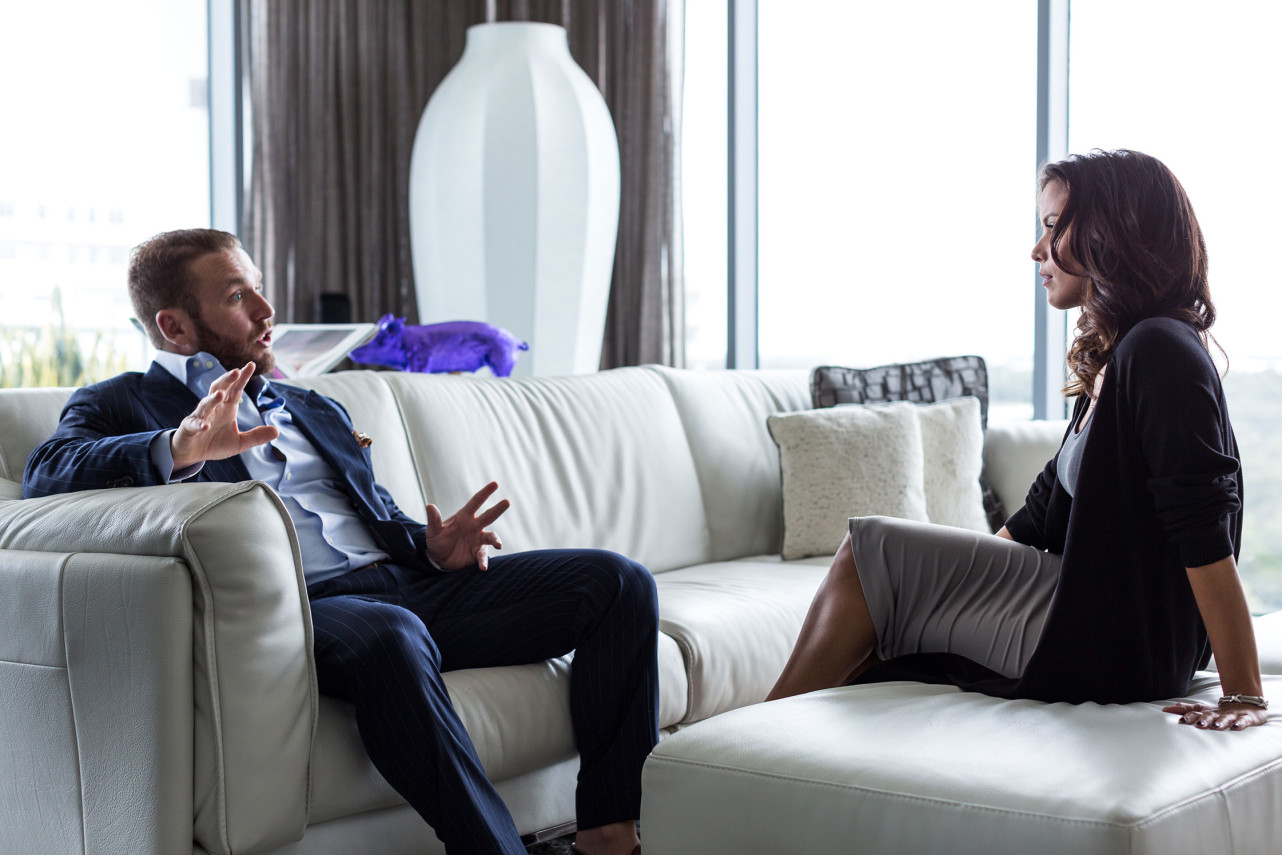 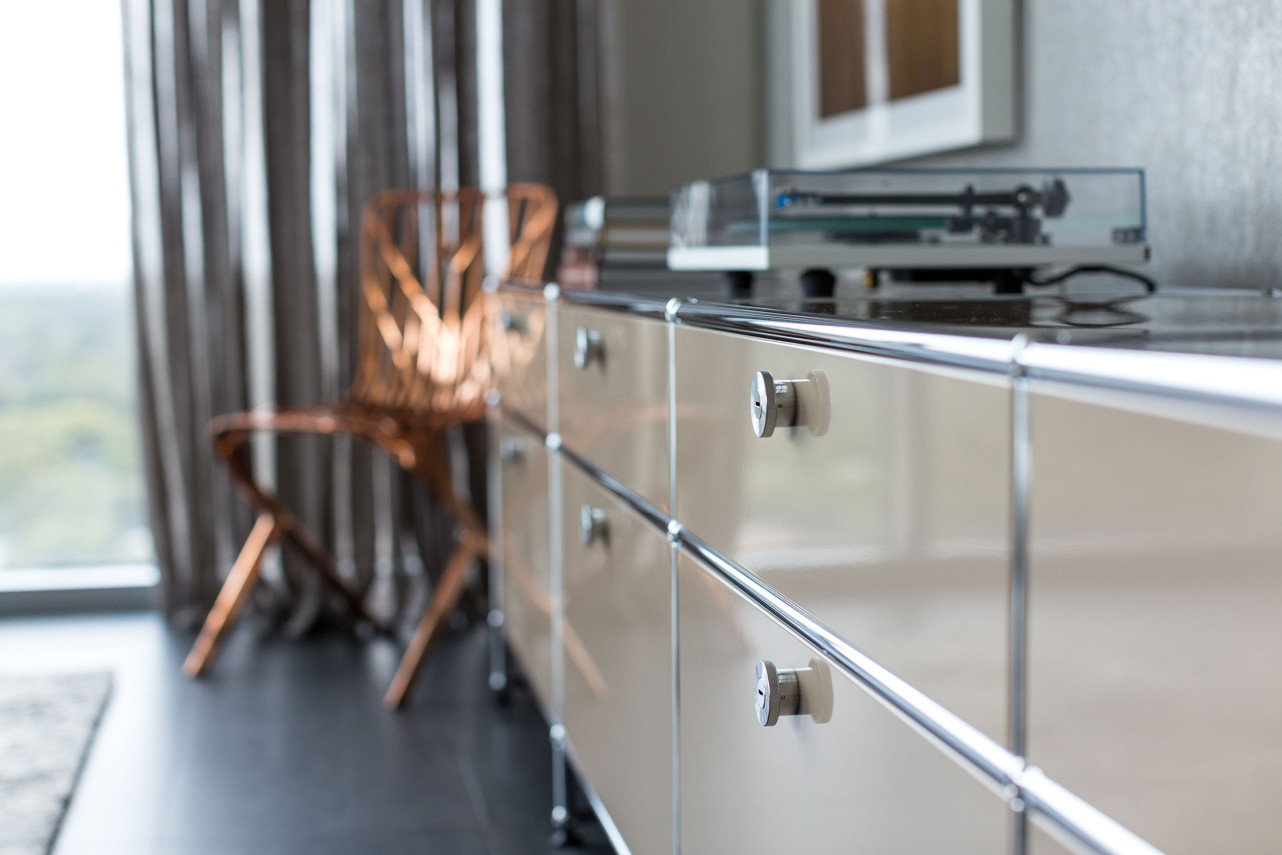 “We all have our stressful days. If I’m leaving work and I’m stressed, I want ‘home’ to be exactly what I like – and this is it.” 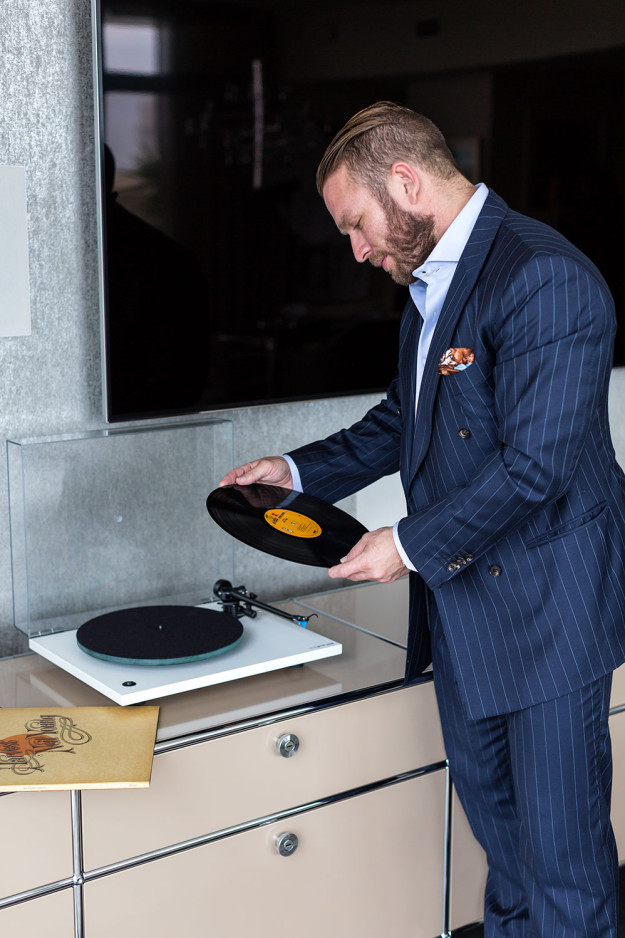 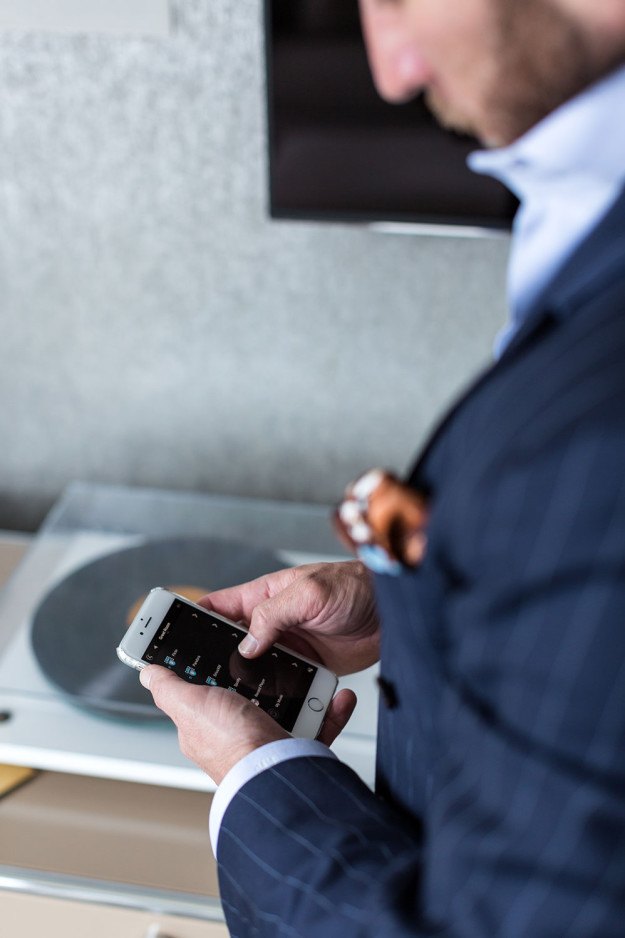 Your home seems to perfectly complement your dapper dress. Clearly, you’re someone who appreciates fashion. Has it always been an interest of yours?

It’s not something that I grew up feeling passionate about, but it has become something I love. I like to dress well; I like to shop. I do think there’s some element of Old Hollywood in the way I dress – my style tends to go back in time, I’d say around the early 20s with three-piece or double-breasted suits. It’s a bit of a Boardwalk Empire style of dress. I like to get creative with the accessories. I love great ties, pocket squares, shoes – that’s what I like most. I even have a copper sculpture of a shoe on the USM Haller Shelf in my living room. That’s something different.

Speaking of that shelf, tell us about your furniture choices. What drew you to select so many USM Modular Furniture pieces?

Almost the entire place – except for the sofa and the chairs and the bed – is furnished with USM. I have some pieces in my office, too. My interior designer, Ted Maines – a friend of mine that I met living here in Orlando – has great taste, and he’s a big fan of USM. We agree on just about everything, including that. USM Modular Furniture just works well with what I like. It’s clean, modern. It comes in great colors that you can mix and match. And it’s flexible – you can make the pieces to be as big or small as you want. They’re just very unique pieces of furniture. 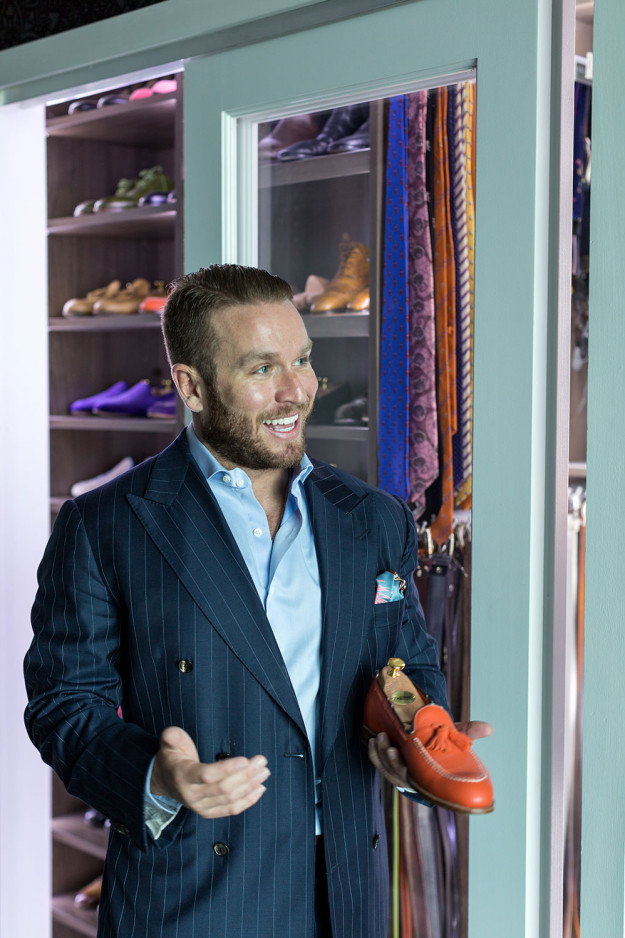 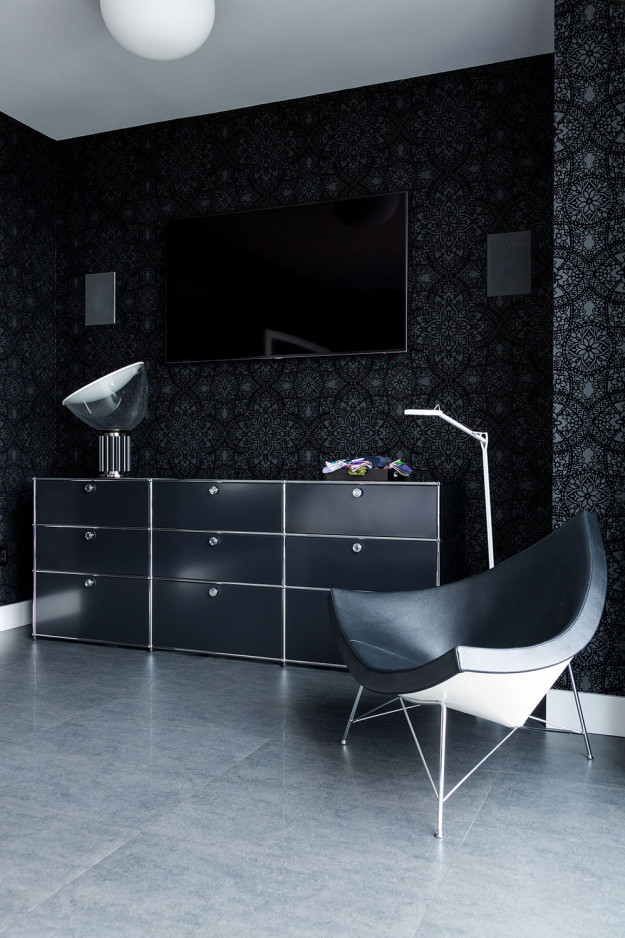 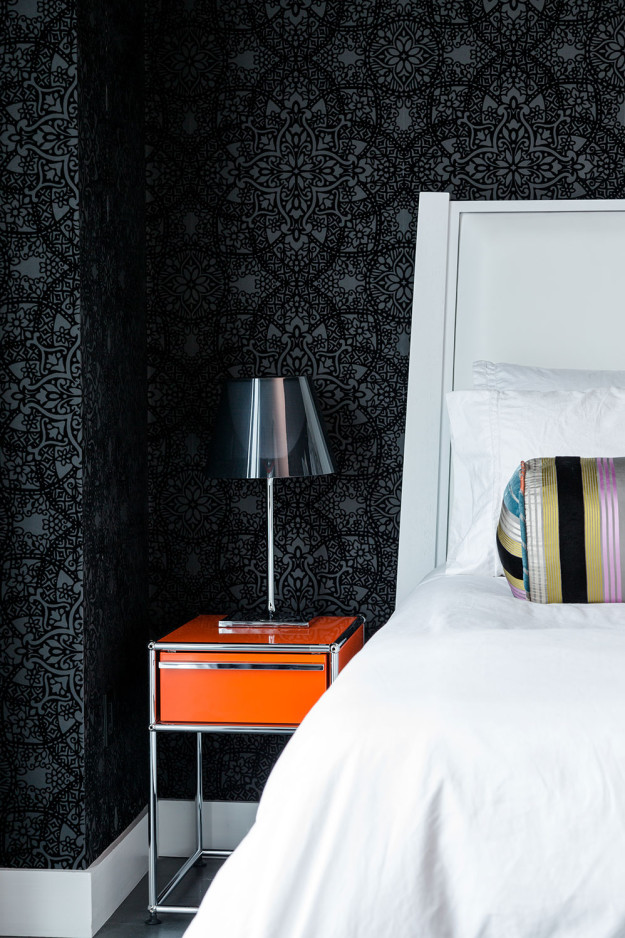 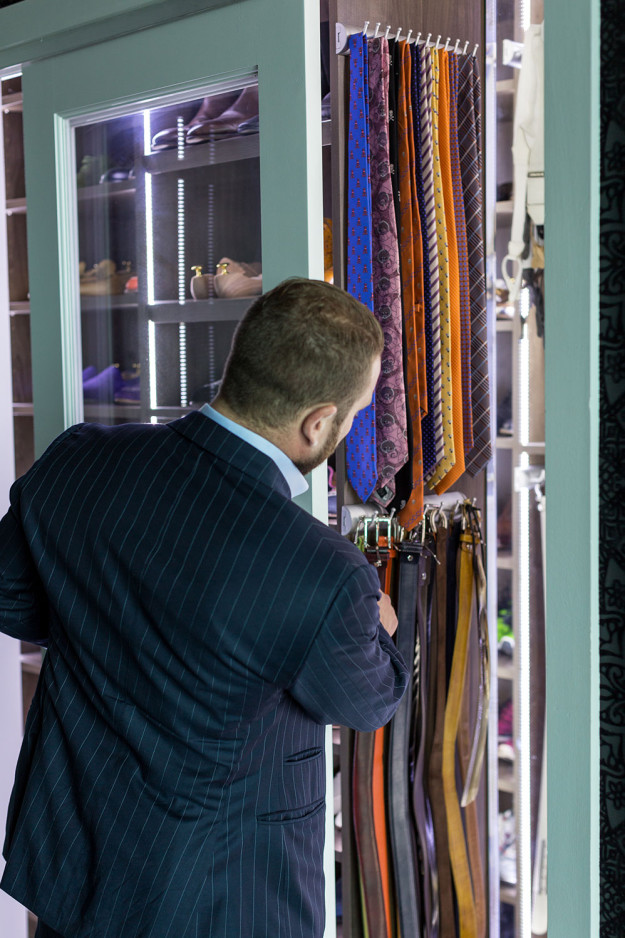 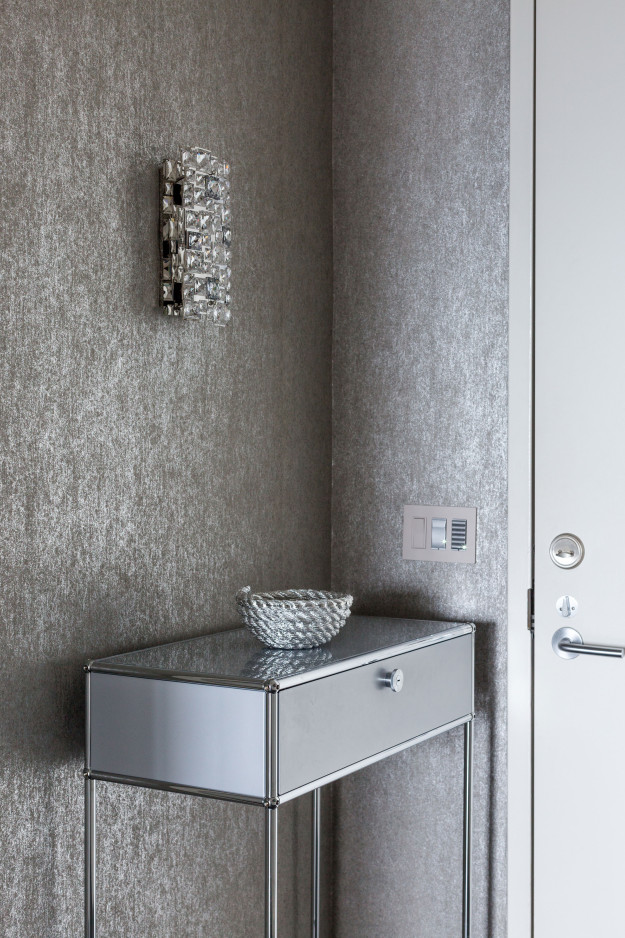 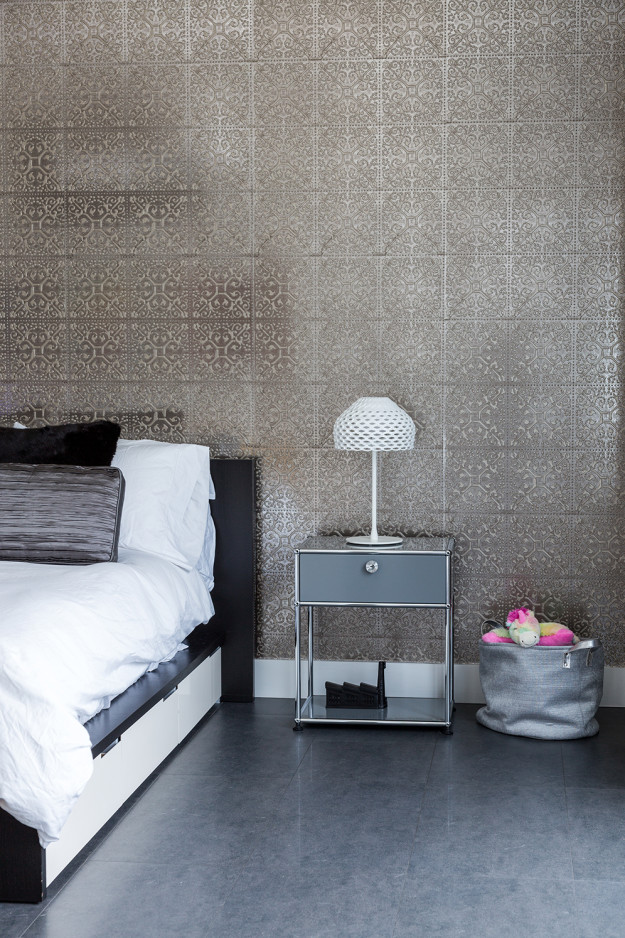 Take us on a little tour of the place. What are some of the stand-out pieces?

We have a beige USM Haller Modern Credenza in the living room that we use to store books and other media items – I loved that it was the right size to hold records. We’ll also keep things like throw blankets in there, in case it gets cold. It’s a very clean-looking piece. I like that you wouldn’t necessarily know that there’s a lot stored in there. There’s another in the bedroom that we use to store clothing and bedding; that one goes well with the black velvet wallpaper. The USM Haller glass shelves, also in the living room, hold various art objects and some books. Natasha’s a fan of pop art and Marilyn Monroe, so you’ll find some of that mixed in, too. The green shelf near the kitchen has a menorah, more books. Our cat, Rhino, hides in there too.

Also, I’d say the dining table is a really special piece. We have friends over and host dinner parties every now and then, and we get asked about it a lot.

In the end, what makes it home?

You know, it’s a sanctuary. We all have our stressful days. If I’m leaving work and I’m stressed, I want “home” to be exactly what I like – and this is it. It’s a place I can return to and unwind. It’s a place where I can relax. Overall, it’s a very calm, warming place that I love to be when I leave the stress of work behind. Natasha and I travel often, but when I think about it, there’s really no place I’d rather be than home. 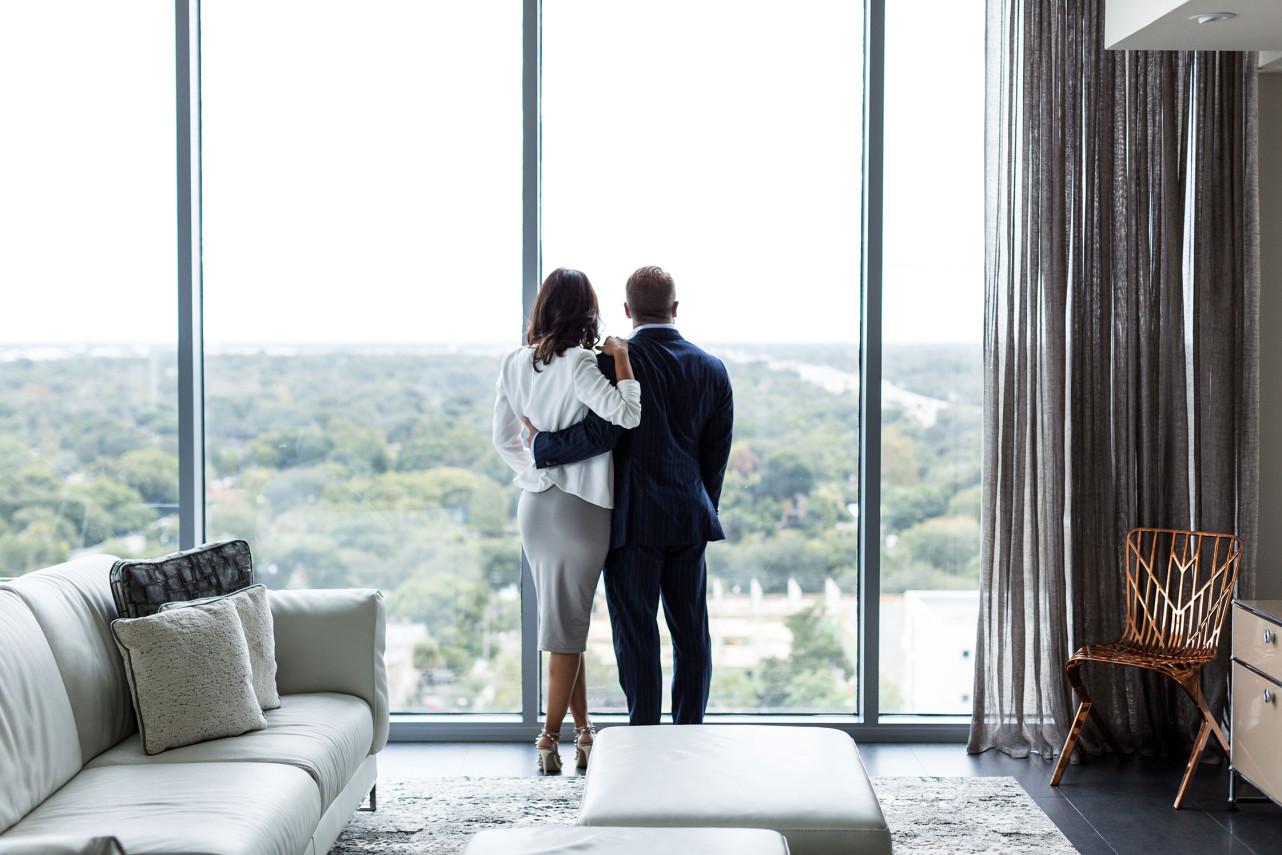 Ryan and Natasha’s windows offer a view of a lush treetop canopy – it’s almost enough to make one forget that the busy streets of Downtown Orlando lie beneath.

Many thanks to Ryan for sharing his thoughts, and for opening the doors to his and Natasha's beautiful sanctuary in the sky. 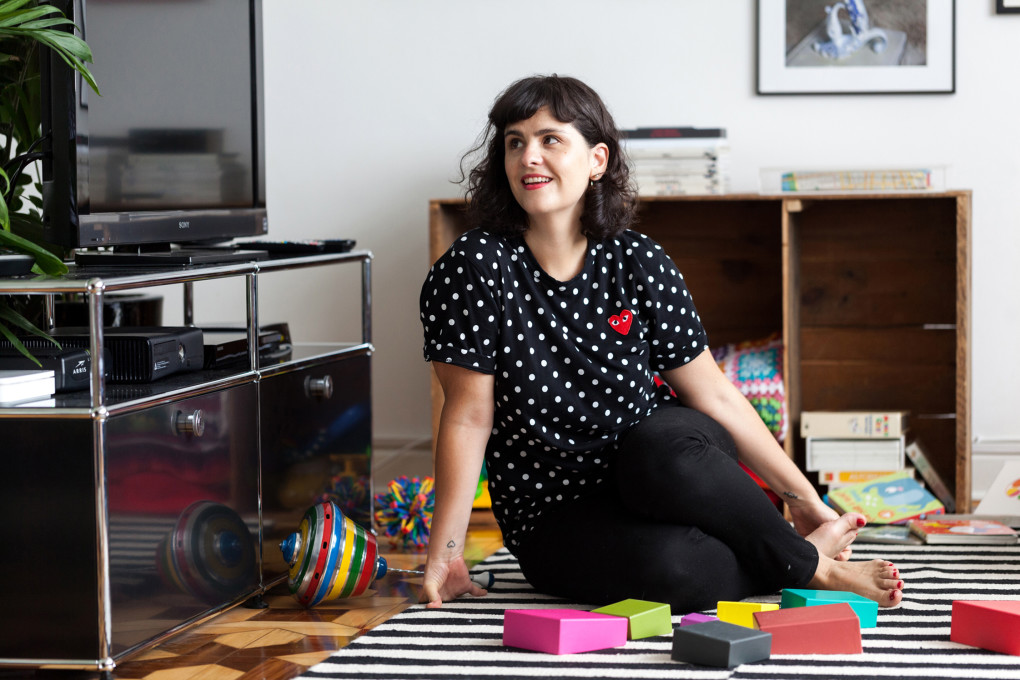 “My style is all about fun!” 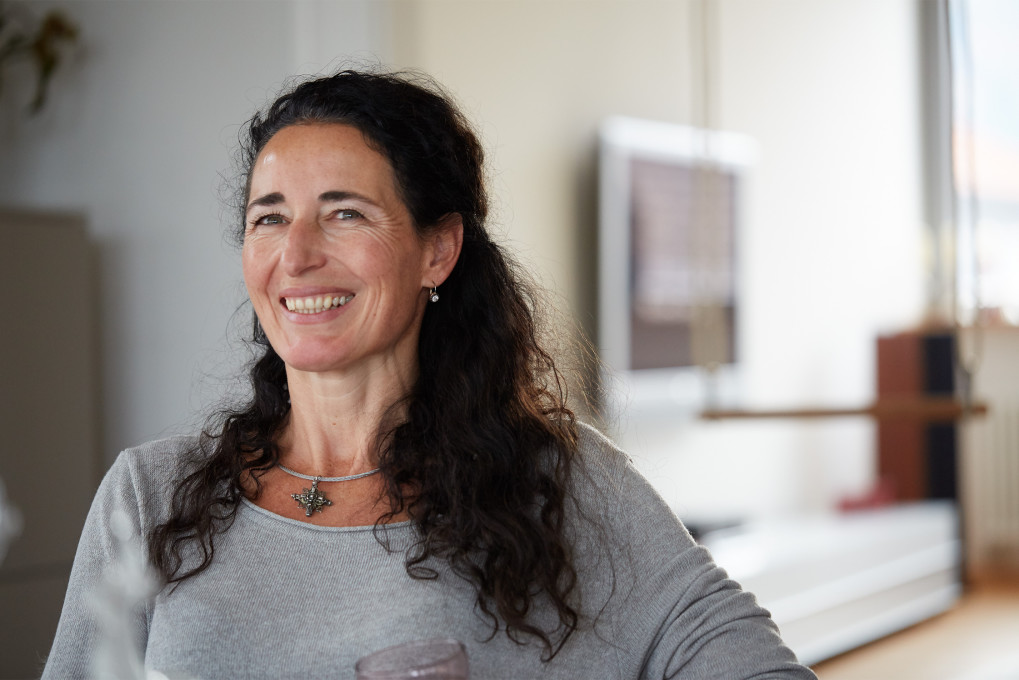 “It’s the furniture’s flexibility, that makes USM so likeable.”