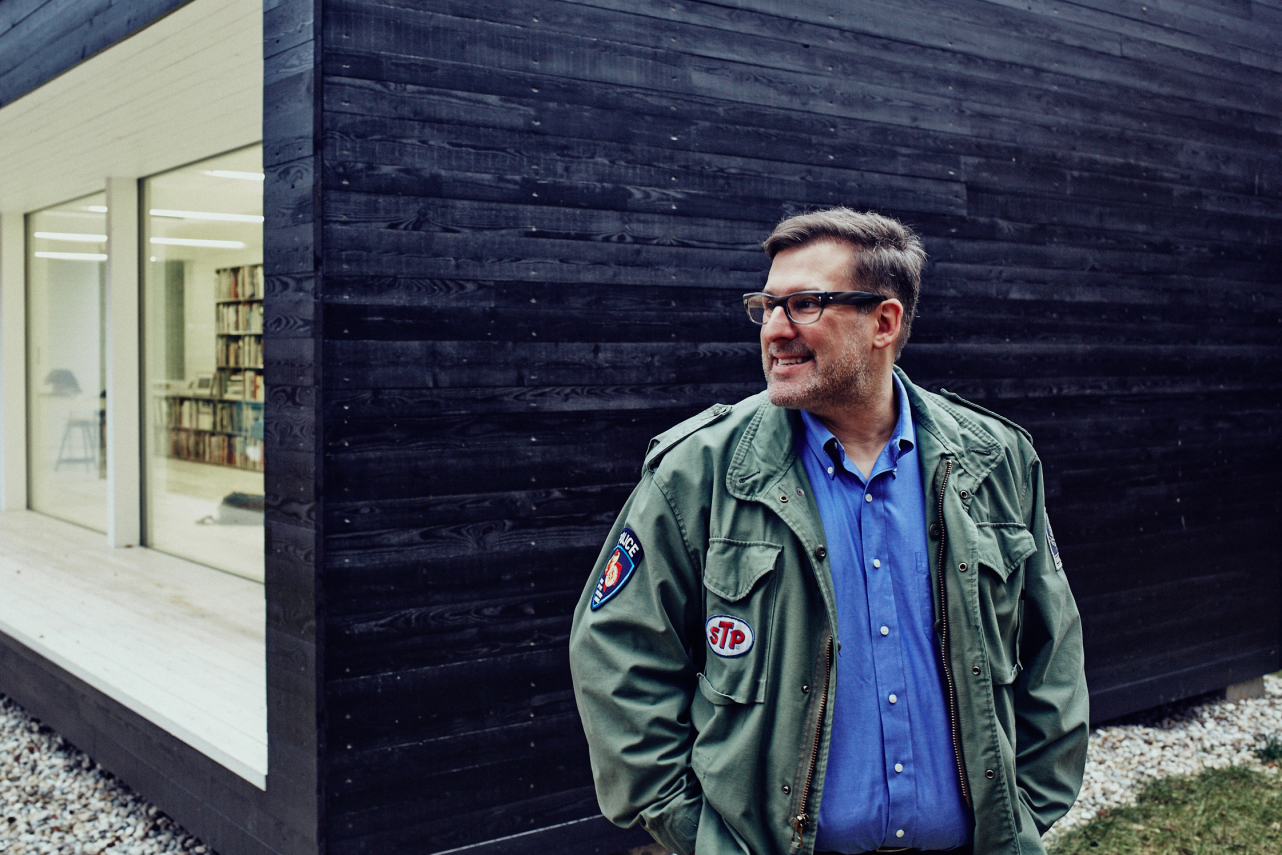 For many years, Florian Holzherr has been photographing not only the buildings of some of the most important architects in the world, but also for internationally acclaimed artists such as James Turrell and Olafur Eliasson. The Munich resident has made a very special dream come true for himself: the architect Andreas Meck has built him a highly modern garden house as a workspace. And instead of having a carpenter custom build his studio, the architectural photographer relied on the modularity of his USM pieces and discovered a very personal, creative use for them. In our interview, the 44-year-old talks about what continues to excite him about his profession - and why he would never want to trade places with a fashion photographer. 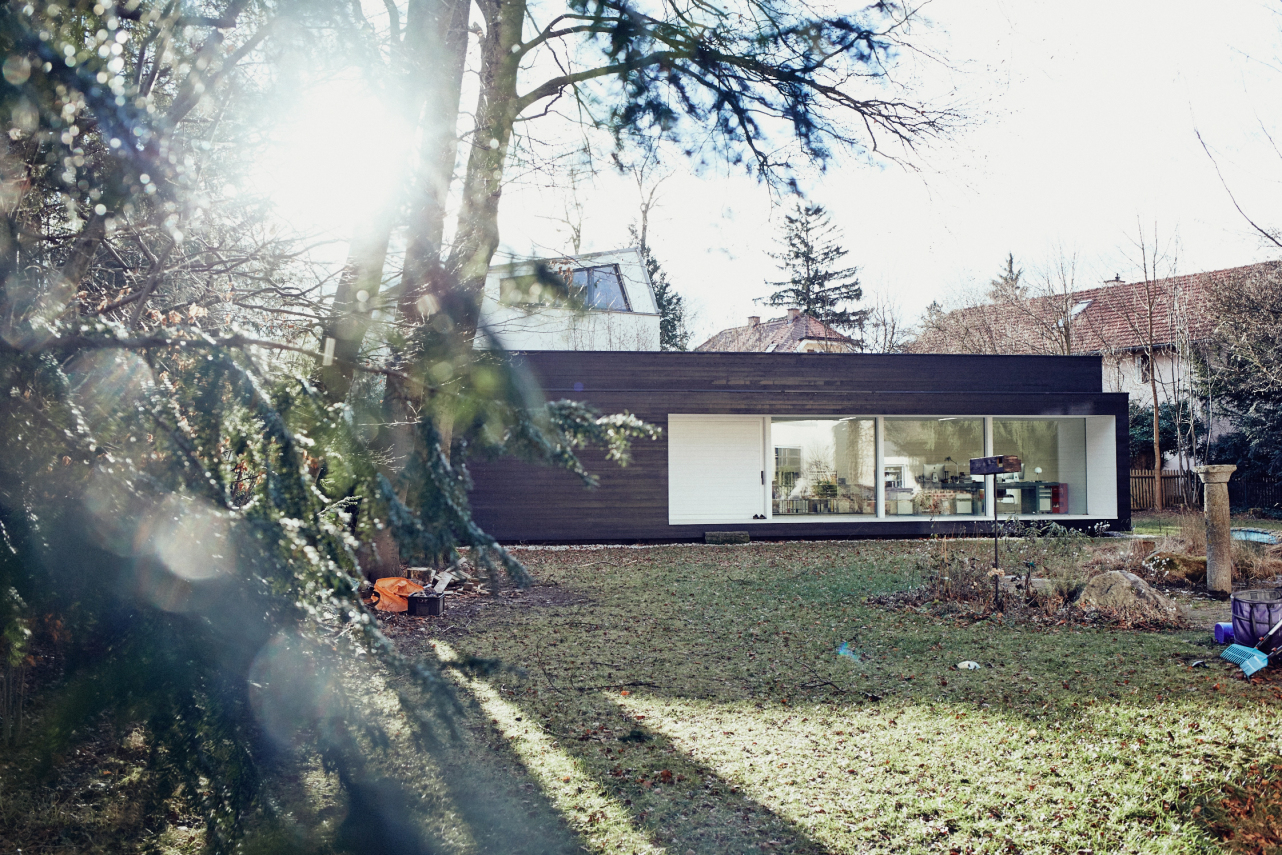 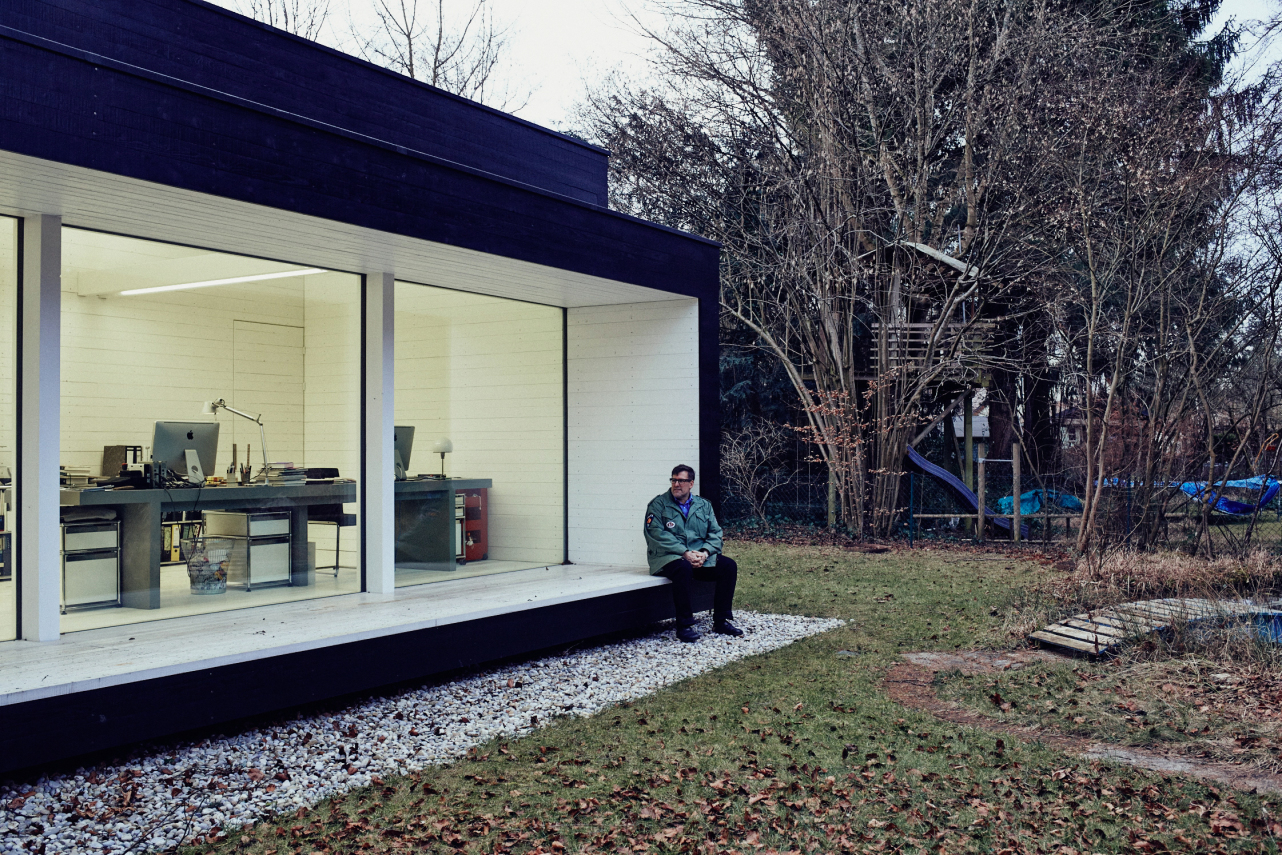 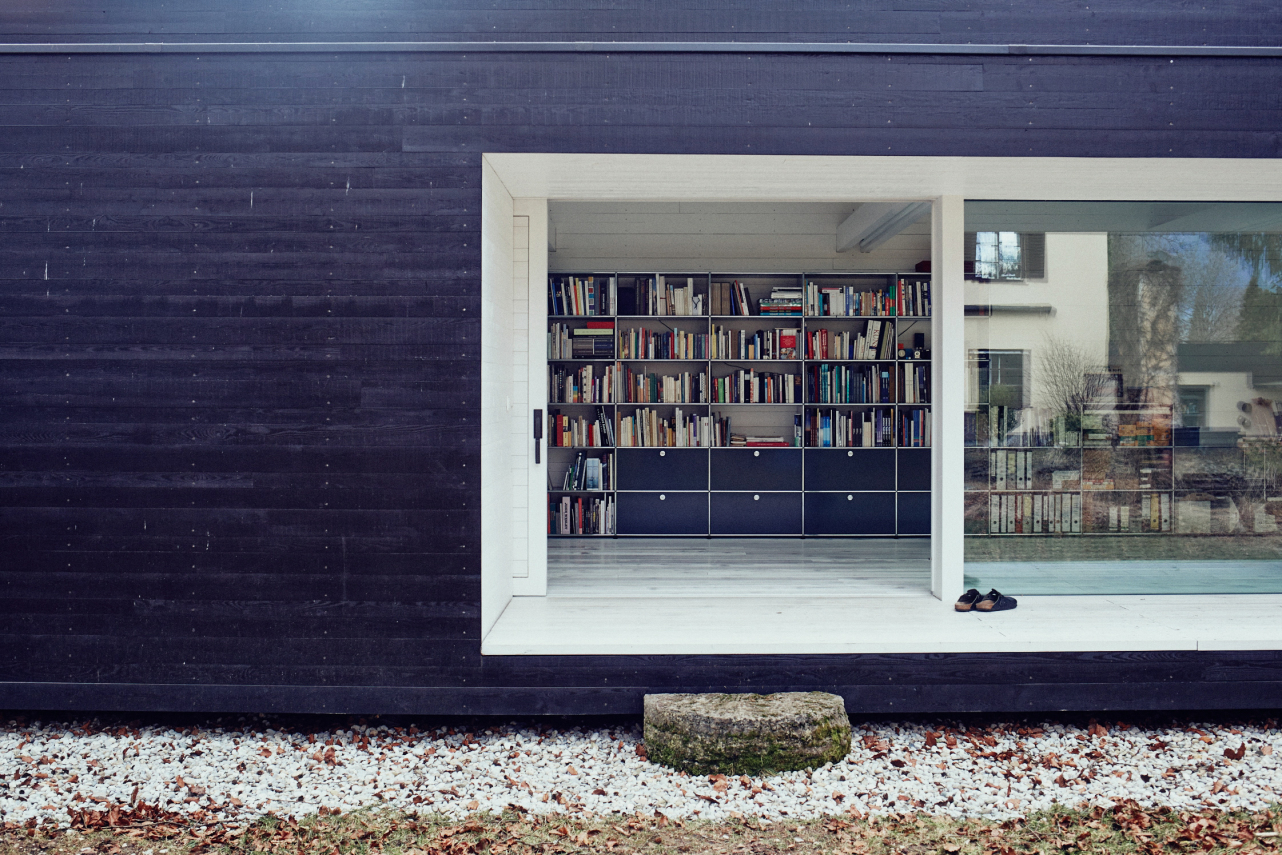 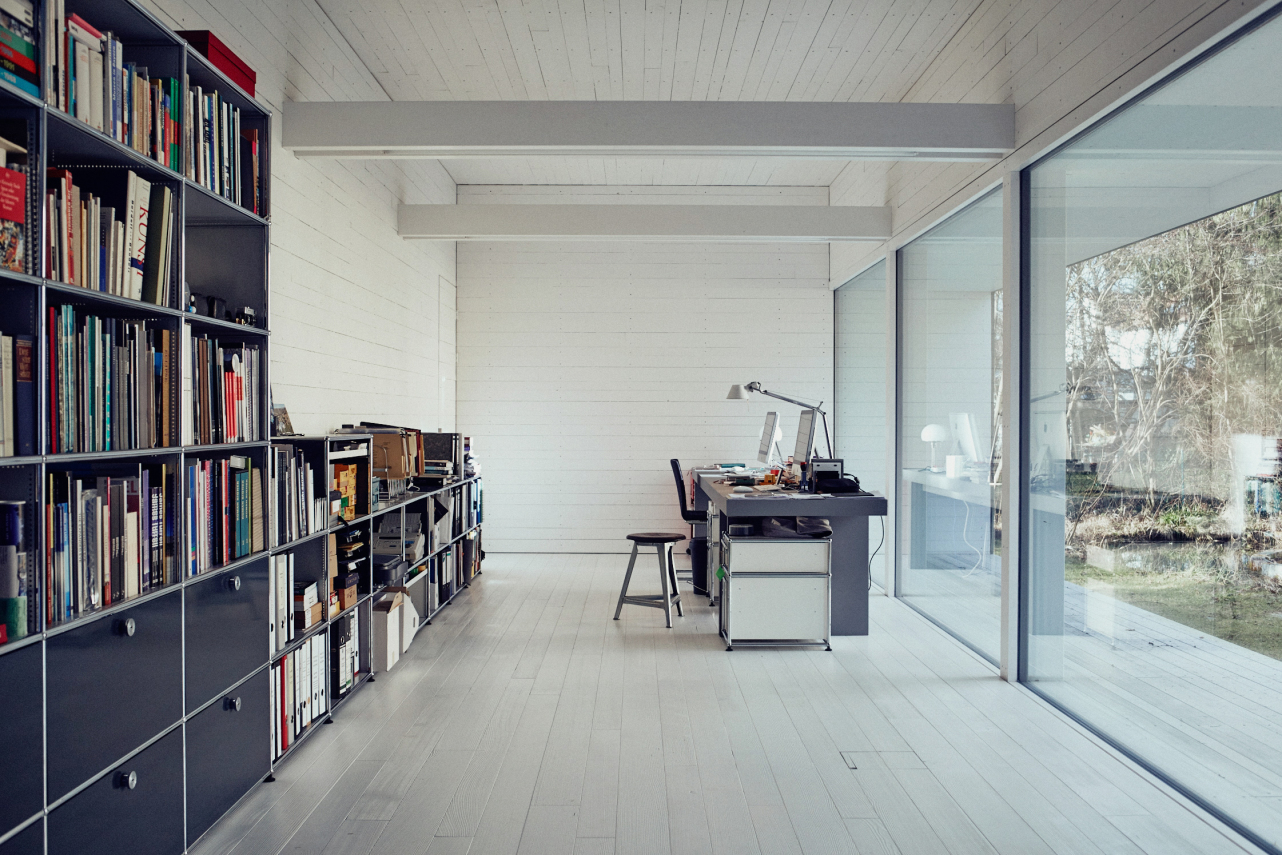 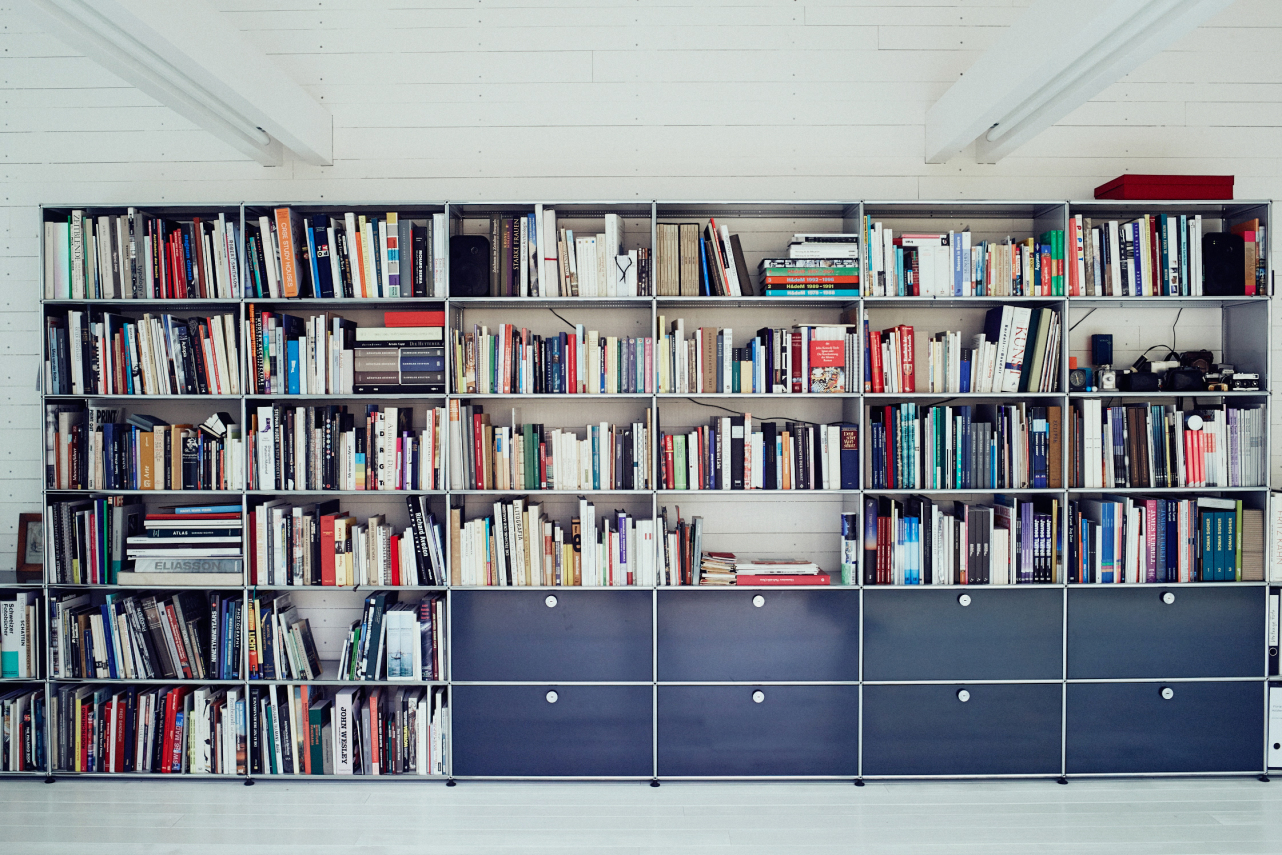 Florian owns a big collection of books, that is sorted by subjects like art, architecture and literature.

Florian, you not only frequently visit New York and Los Angeles, but also the deserts of the U.S. What brings you there?

The collaborations with the Donald Judd Foundation and the land artist James Turrell. Between 2000 and 2008, I frequently went to Marfa, Texas, for the Judd Foundation. Very impressive. And I keep going back to Flagstaff, Arizona, because Turrell has his crater there (the Roden Crater, an extinct volcano that Turrell has been using for over 40 years for the construction of a spectacular sky and light observatory); I do a lot of photography for him. All the artists I think are amazing are in the desert, such as Michael Heizer and Walter De Maria, who, unfortunately, died in 2013. Each of them installed gigantic projects in different states.

Have you ever thought about moving to the U.S.?

Yes, in 2003. But then I met a woman and stayed here. New York is wonderful, but if you actually have to live there, it’s incredibly stressful, brutal and expensive. You’re not living in Manhattan or Queens but somewhere on the outskirts. But if you come to the U.S. as a German photographer, you are at an advantage. Americans love “Made in Germany” photography.

Your work space is in the garden of your parents’ house, where you have been living for over four years. How did that come about?

I have always wanted to build something here. And my wife and I needed a place to work. She restores paper and has her desk here as well. The idea developed like this: I had photographed the military memorial for the architect Andreas Meck in Berlin. As a result, we spent a lot of time together, driving from Munich to Berlin in the morning and back at night. That’s when I told him about the garden house concept. I had no idea whether I could afford it. 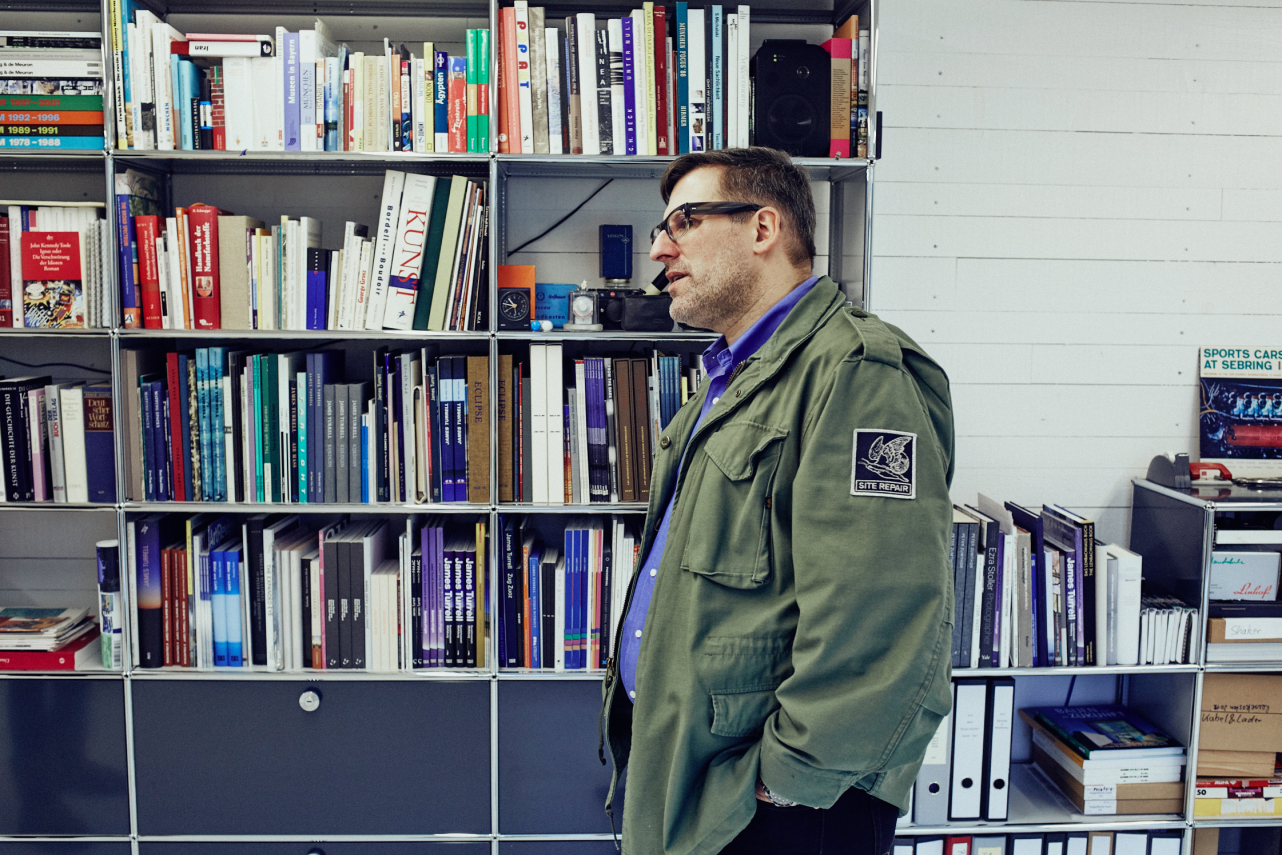 Florian used to travel a lot in America for professional reasons and has taken photographs of many artists’ projects, including James Turrell’s light observatory. 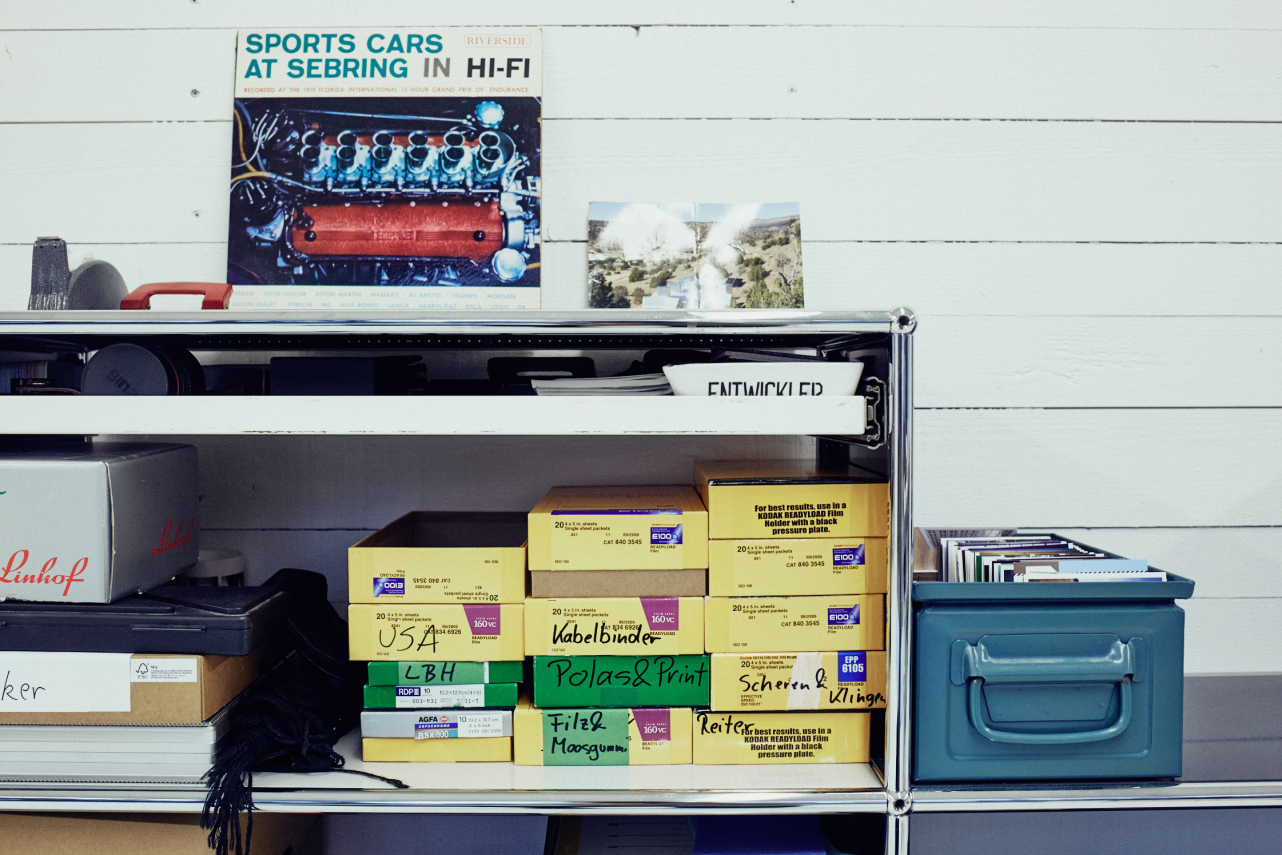 “I always tell my students to go three steps back at first. Only then can you reflect on how to photograph something.” 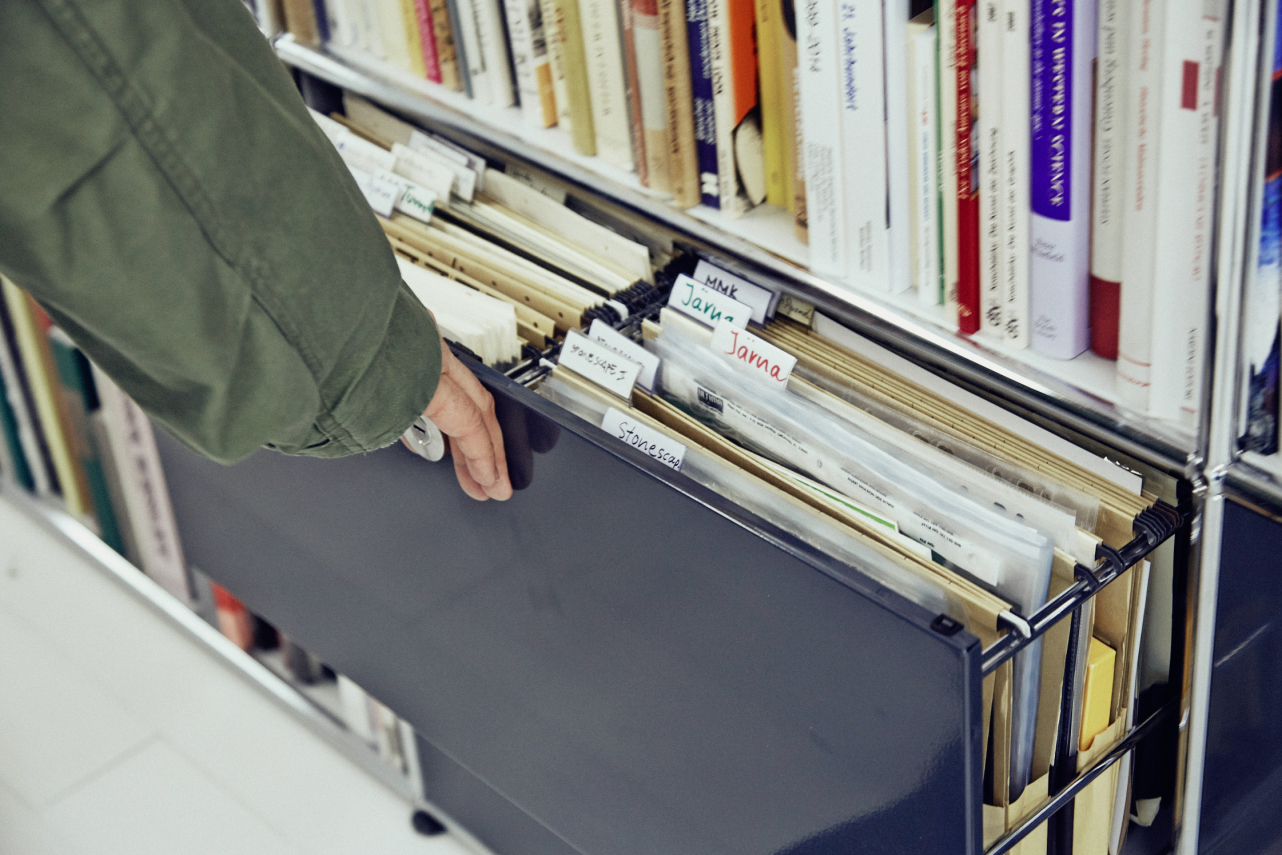 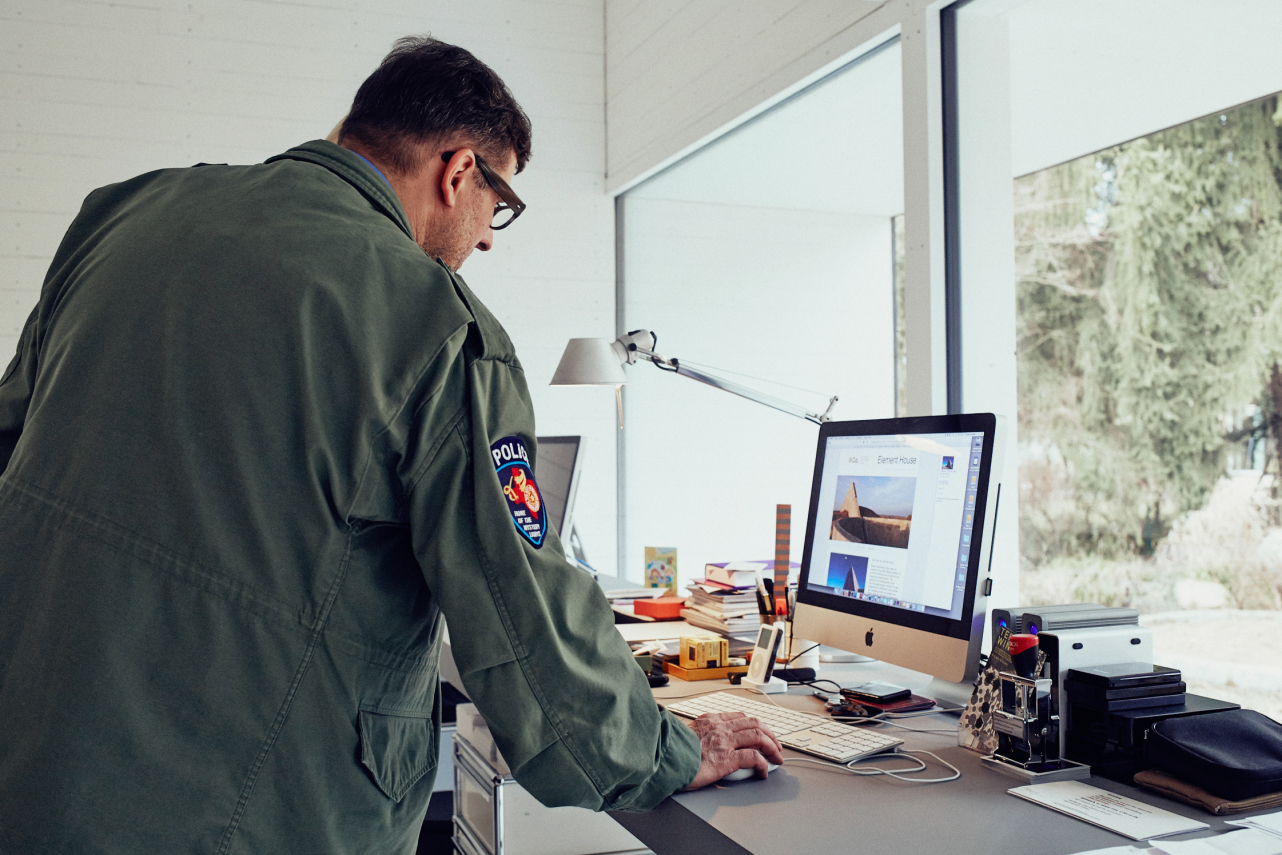 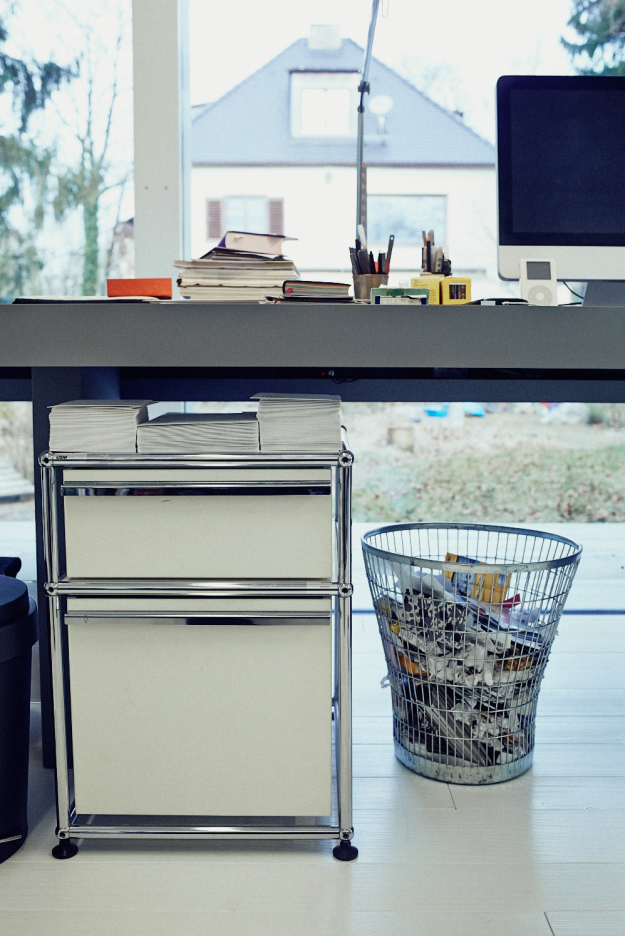 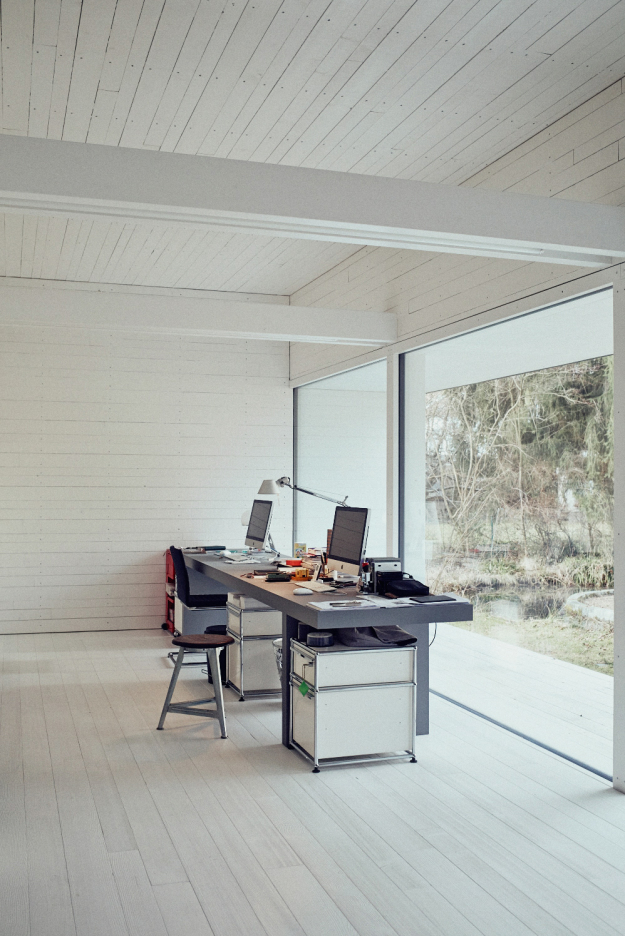 How did Andreas Meck like the idea of building a garden house for you?

He was on fire. He said we could do it. I didn’t even know if the bank would give me money. But it worked out. The first design that Meck made was exactly this house; there were only minimal modifications after that.

You have been working in this studio for four years. How did this influence your way of working?

I am suddenly much tidier than before. This space forces you to be neat.

You have some USM Haller furniture in your studio. Did you buy it specifically for this purpose?

No, I previously had some smaller pieces in my shared office in the city. Then I moved to my new office. Sure, you can have a carpenter make your furniture, but you don’t have flexibility that way. So you take what you already have and continue with the USM Haller furniture.

The nice thing about it for me is that the furniture is classic and never goes out of fashion. You never grow tired of looking at it. Of course, with the white one, you have to be a bit careful that it doesn’t look like you’re at the dentist’s. Another good thing about USM Haller is that you can get the furniture used from the start. 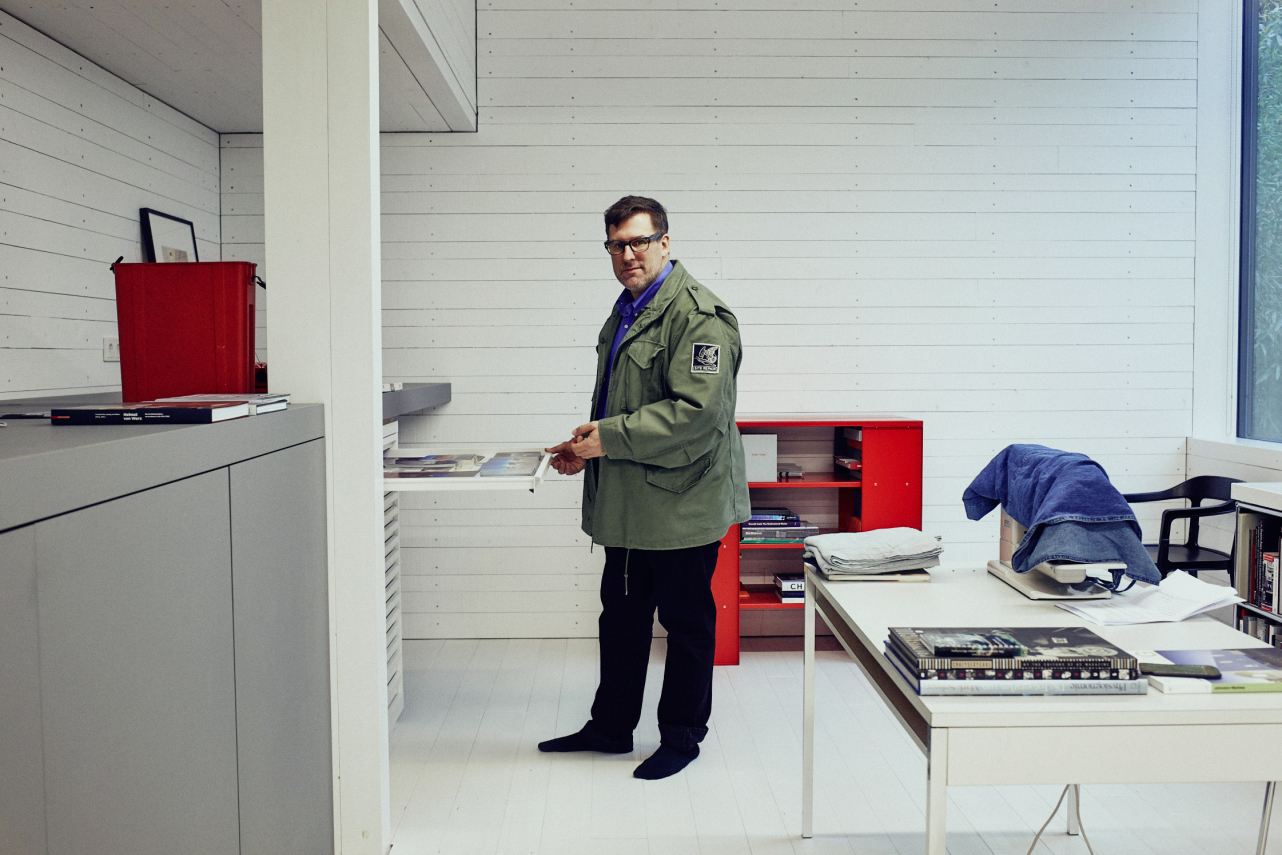 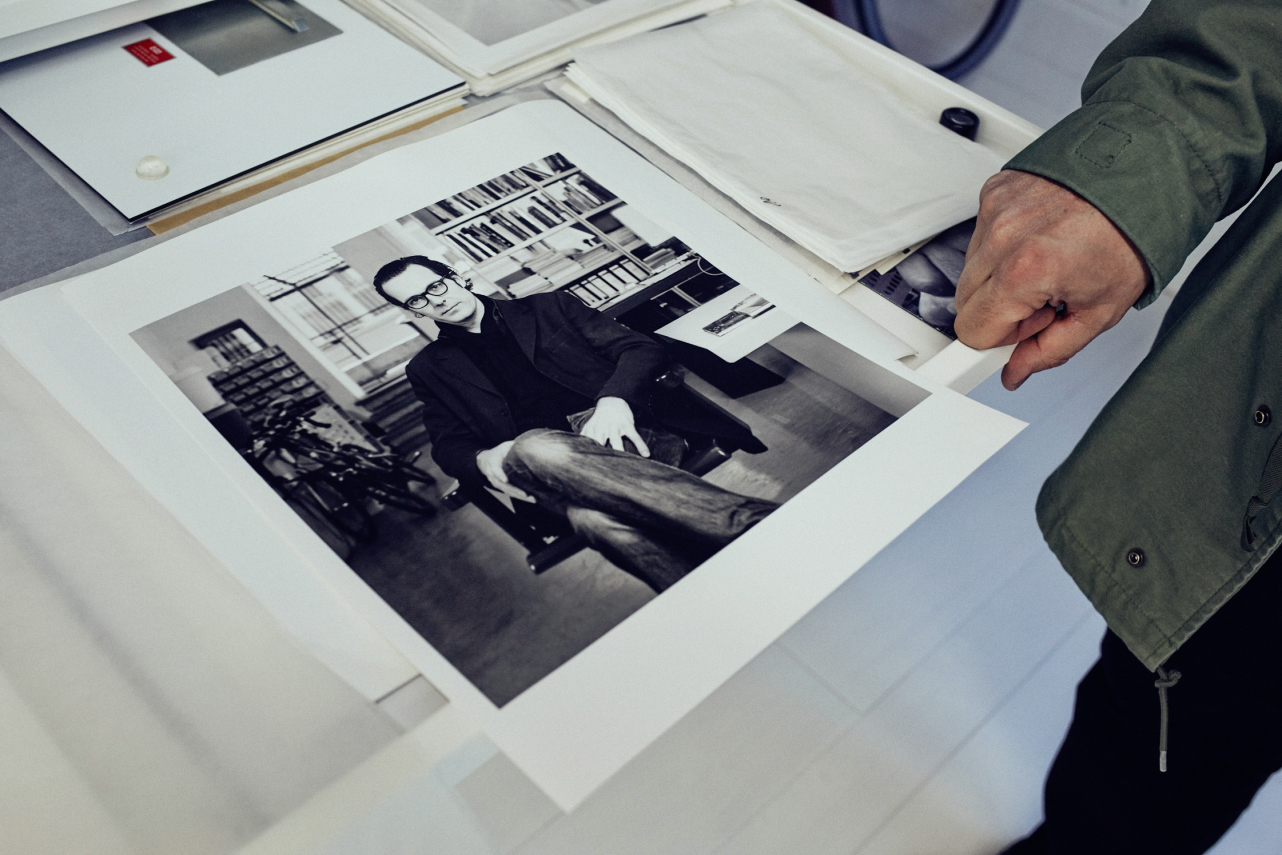 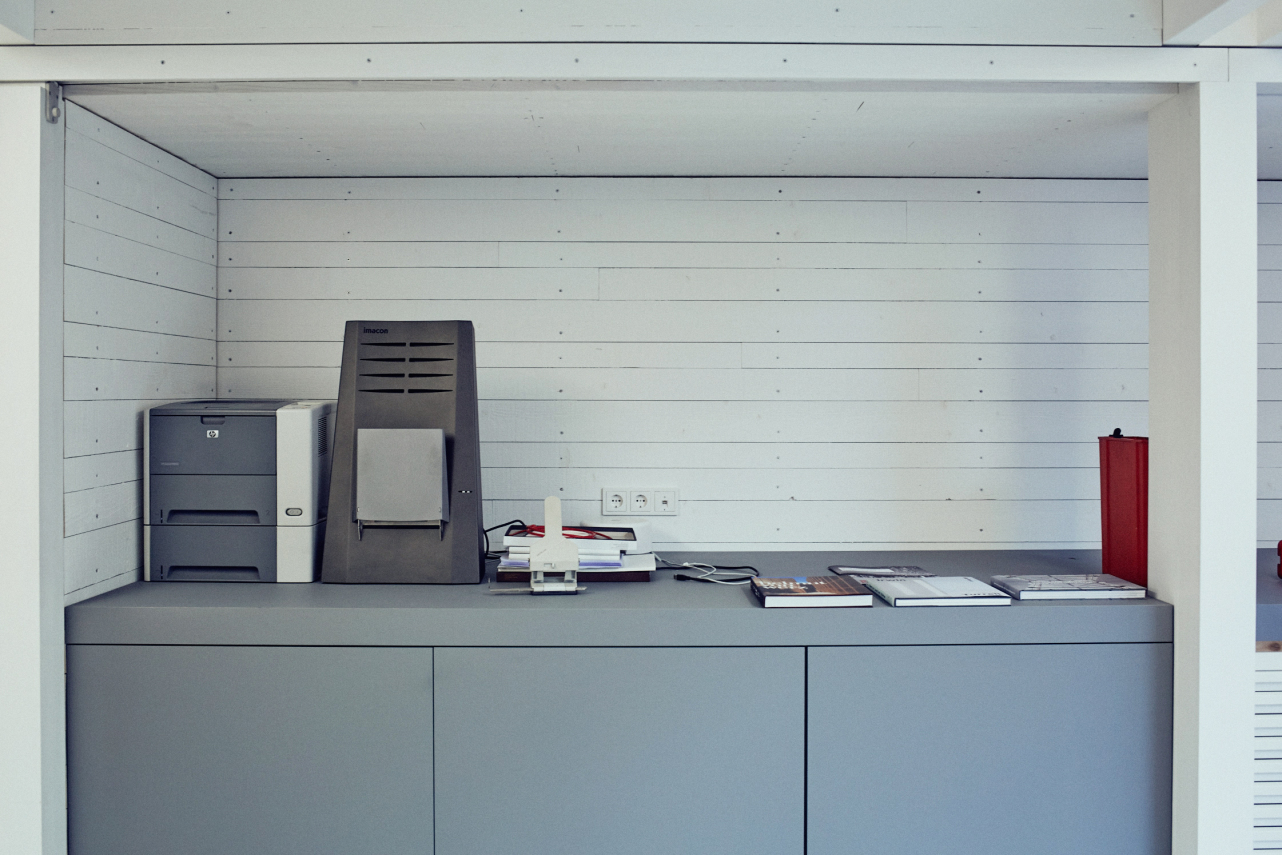 Since Florian started working here, he has become much more tidier. The room forces him to do that, he says. 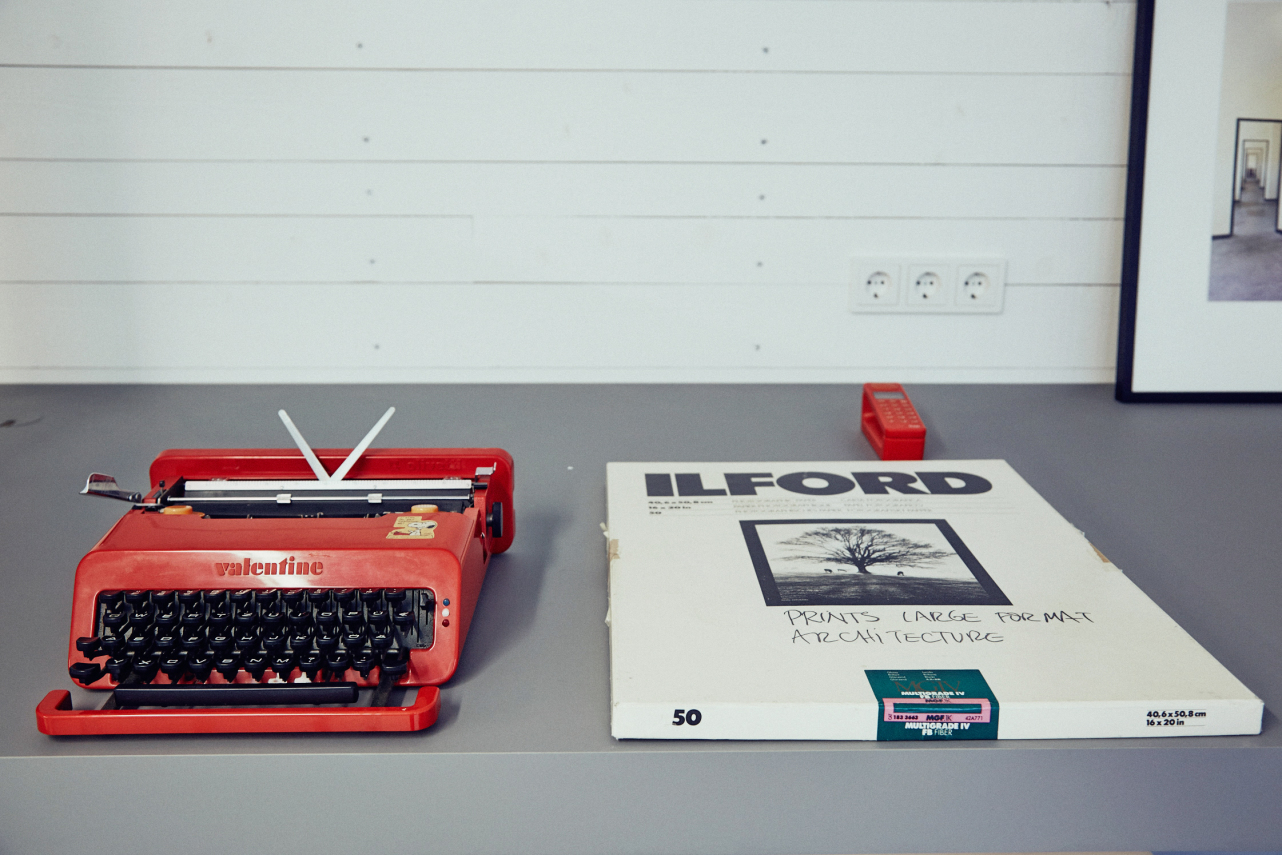 What do you store in the USM Haller furniture?

Hanging file folders are in the lower part. I use it as a photo archive because I still do a lot of film photography. I removed the back walls to get more light. Supposedly the shelves are really difficult to build, but that’s not true – I did it all myself, and it was easy. You just have to think like USM. If screws screw up, you screw them down on USM Haller.

You also have an extensive architecture and art library on your USM Haller.

Exactly. It is even fairly well sorted by art, architecture and technical literature. But I still need the right order. The good thing is that you can keep throwing heavy art books onto the shelves, and it won’t be too heavy. Every other shelf would droop.

Had you seen USM in someone else’s space?

You see it everywhere. USM Haller is simply part of the canon. At some point, you buy your first used rolling cart, and then it keeps going. The advantages of flexibility are plain to see. 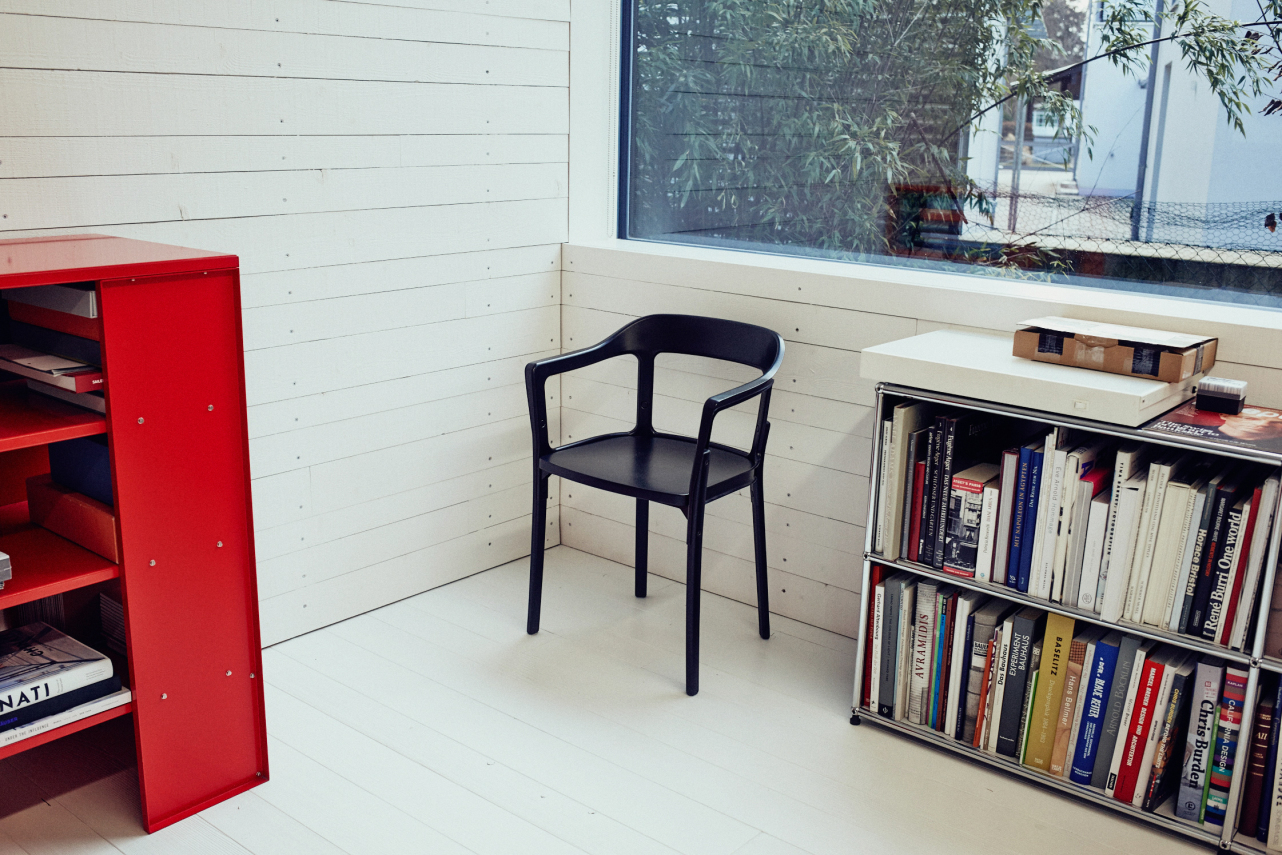 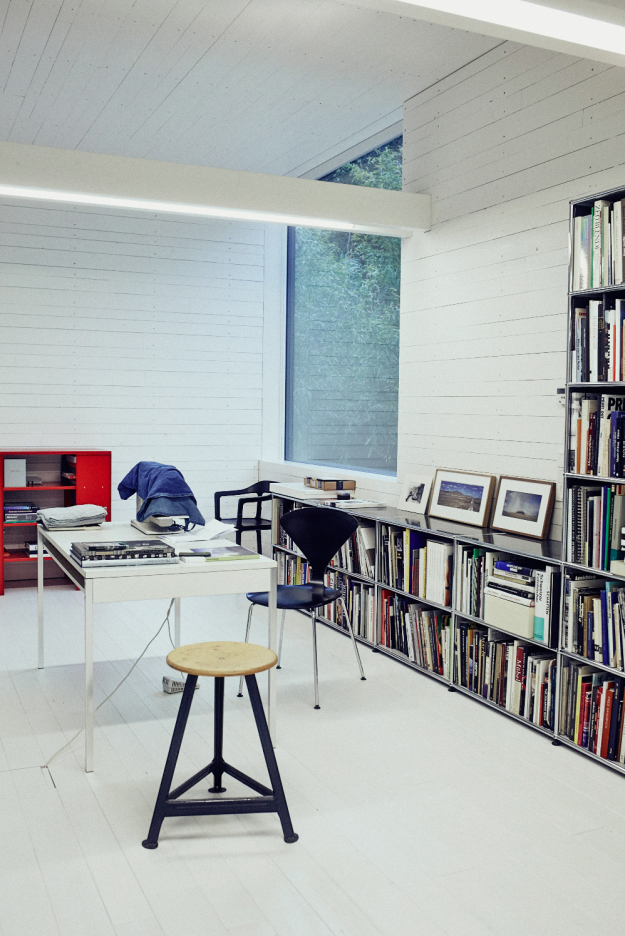 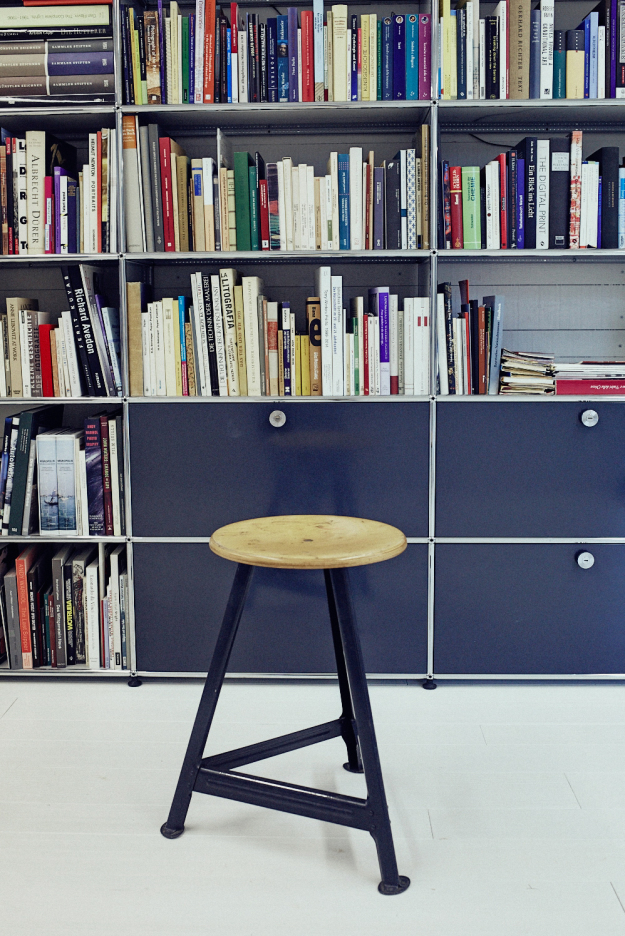 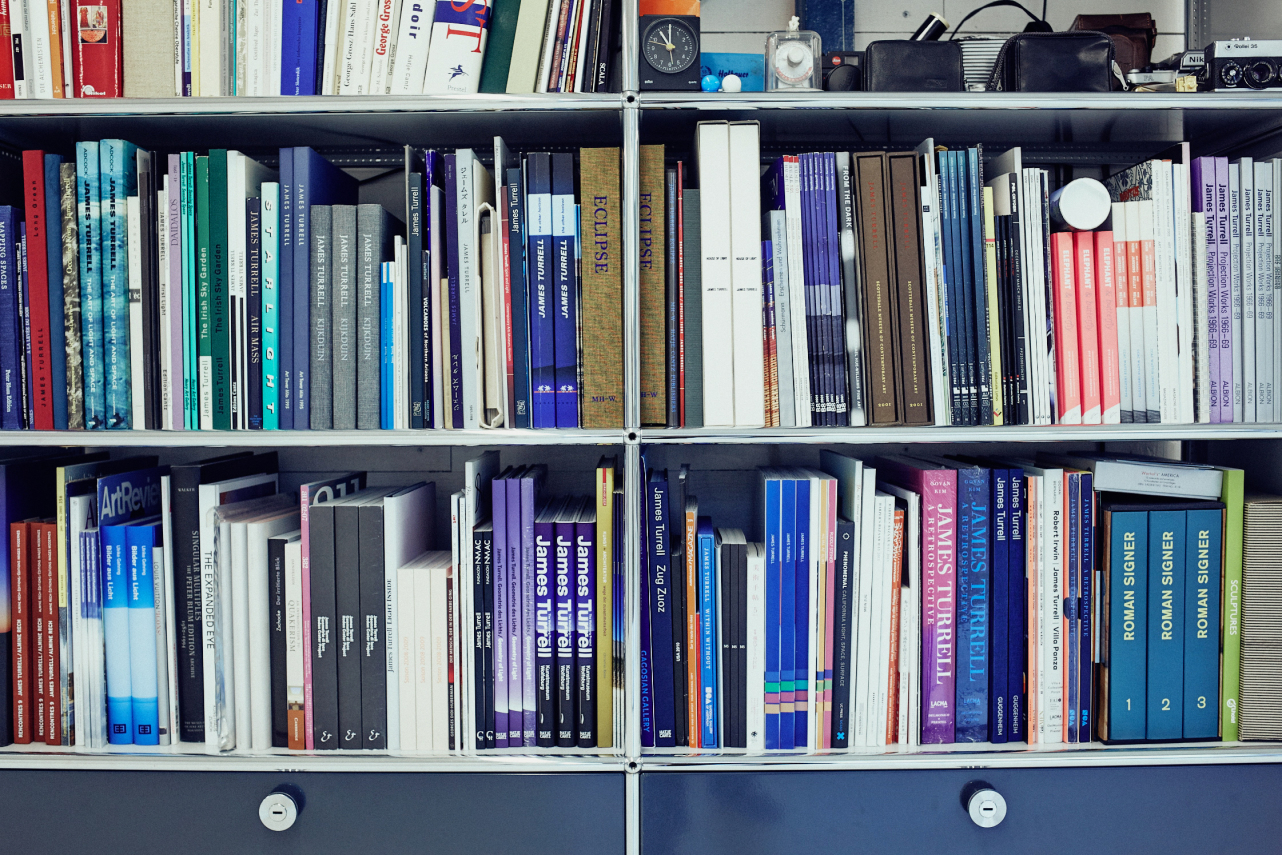 “It is easy to build USM Haller. You just have to think in the same way as USM.”

Let’s look into the past. How did you become a photographer?

There have always been only three things that interested me: art, architecture and photography. After school, I started working as a photo assistant and applied to the photography school in Munich. I completed a three-year training at the State Academy of Photographic Design, which happens to be the oldest photography school in the world.

How did you manage to get a start on your career after school?

Meeting Turrell in 1989 played an important role. He worked in Munich at the time. My sister was studying art and was his assistant.

And then there was another key event. In photography school, we were asked to photograph celebrities. Among others, I had selected the architects Herzog & de Meuron, who were not easy to get to. At one point, my cell phone rang and I was told that I could take a portrait of them. I was given 15 minutes. My heart was pounding.

A few weeks after the portrait appointment, I was given the opportunity to photograph a house for Herzog & de Meuron. This opened the door. It’s always important to have an initial spark.

You have a pretty impressive collection of cameras on your shelf. Do you still use them all?

I used to photograph with all of them. I needed a waterproof camera with which to photograph my three-year-old daughter at the beach. The underwater camera from Nikon takes fantastic photos. Another great compact camera is the Rollei 35. The design is incredibly beautiful: a nice, small camera that you can just put in your pocket. But even I currently take 90% of my photos with my iPhone. Everyone takes nothing but iPhone photos anymore, no matter where you are. Terrible. 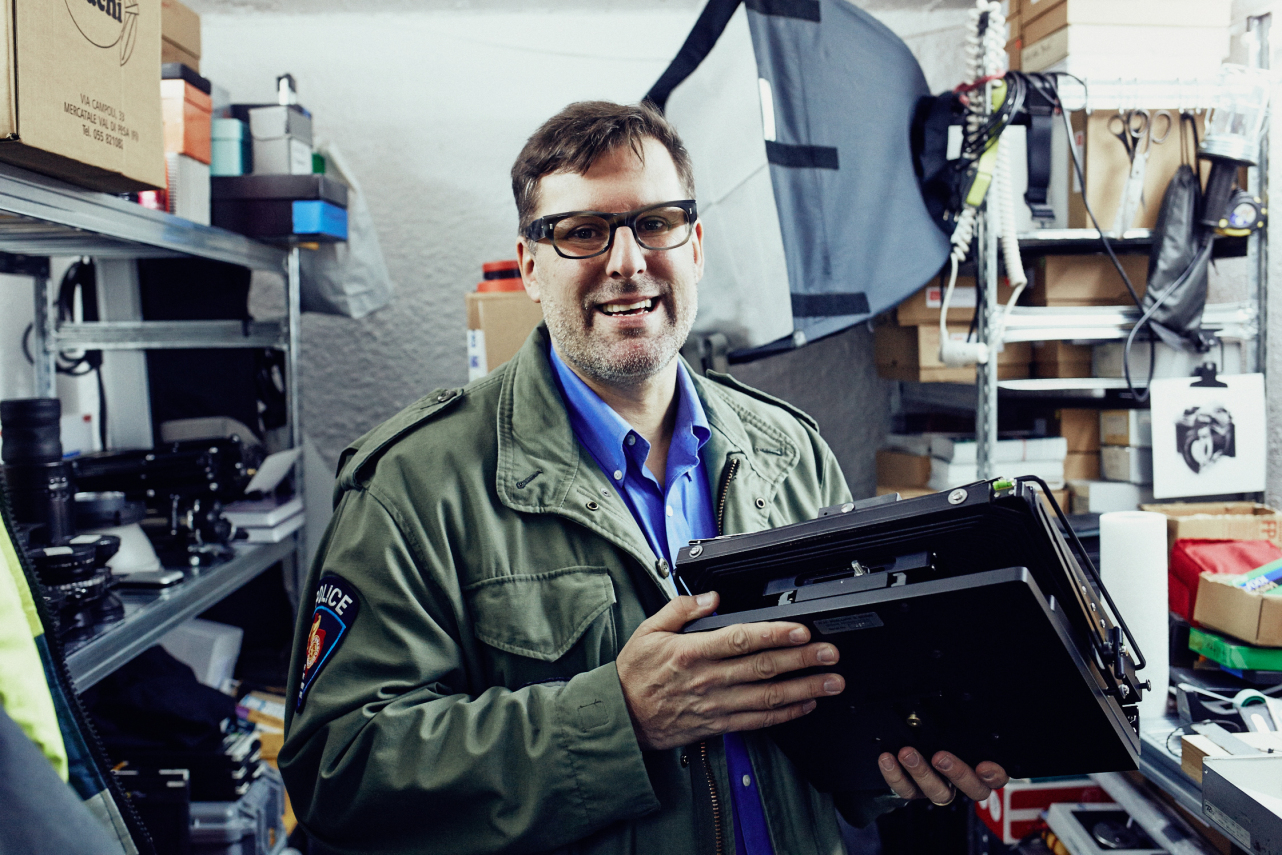 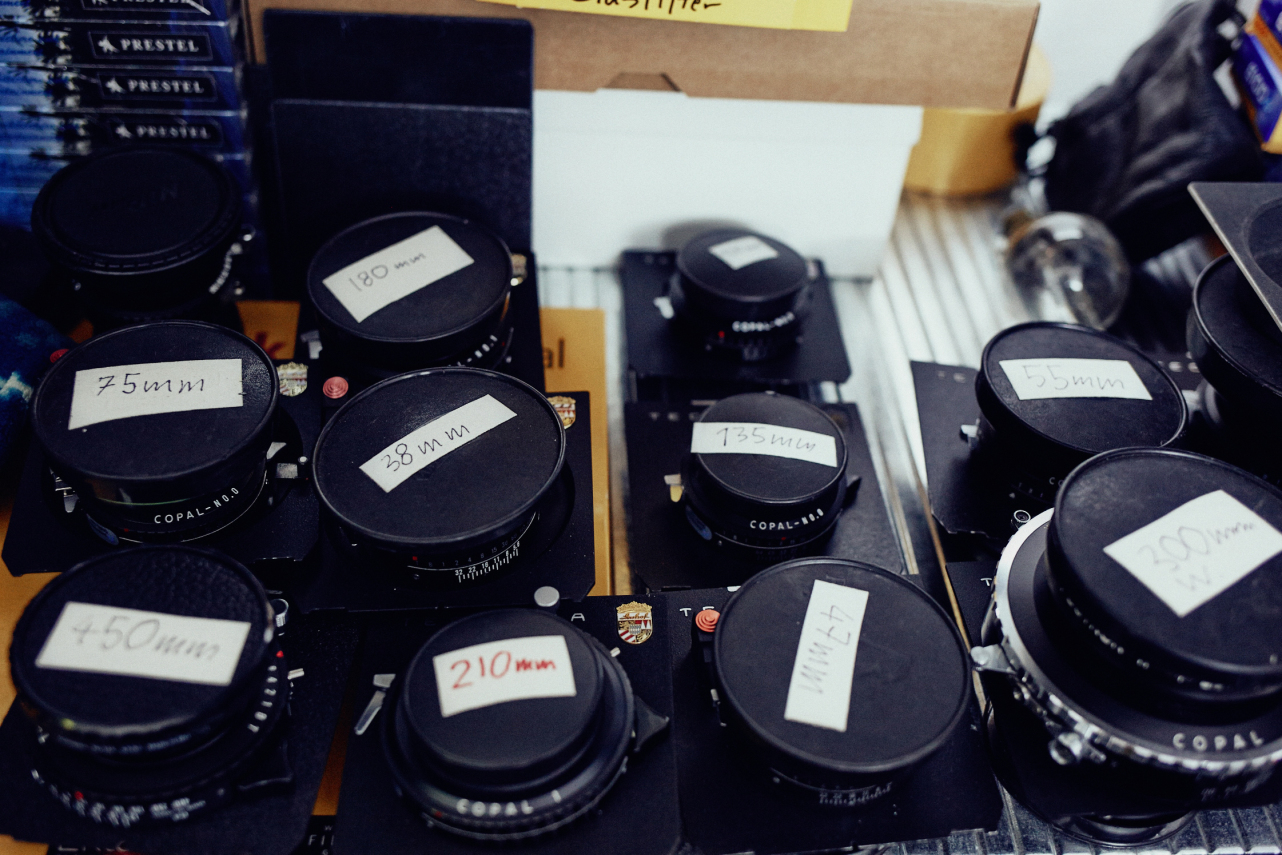 From Nikon to underwater cameras: throughout his life Florian has photographed with a large variety of cameras. It annoys him that today he frequently just reaches for his iPhone.

As an artisan. It’s about letting art and architecture look as good as possible. I always tell my students to take three steps backward and then go down on their knees – then you can think about how to photograph something. I find it difficult to get super creative myself. It can’t be fashionable. My photos have a different application than images made for Vogue.

Do you have another passion besides photography?

To finish up, name three buildings that have made an impression on you.

The Pfaffenholz Sports Centre by Herzog & de Meuron took my breath away when I was a young photo assistant. Then of course, the Salk Institute in La Jolla, California, near San Diego. And the Goetz Collection in Munich, one of the first buildings by Herzog & de Meuron. 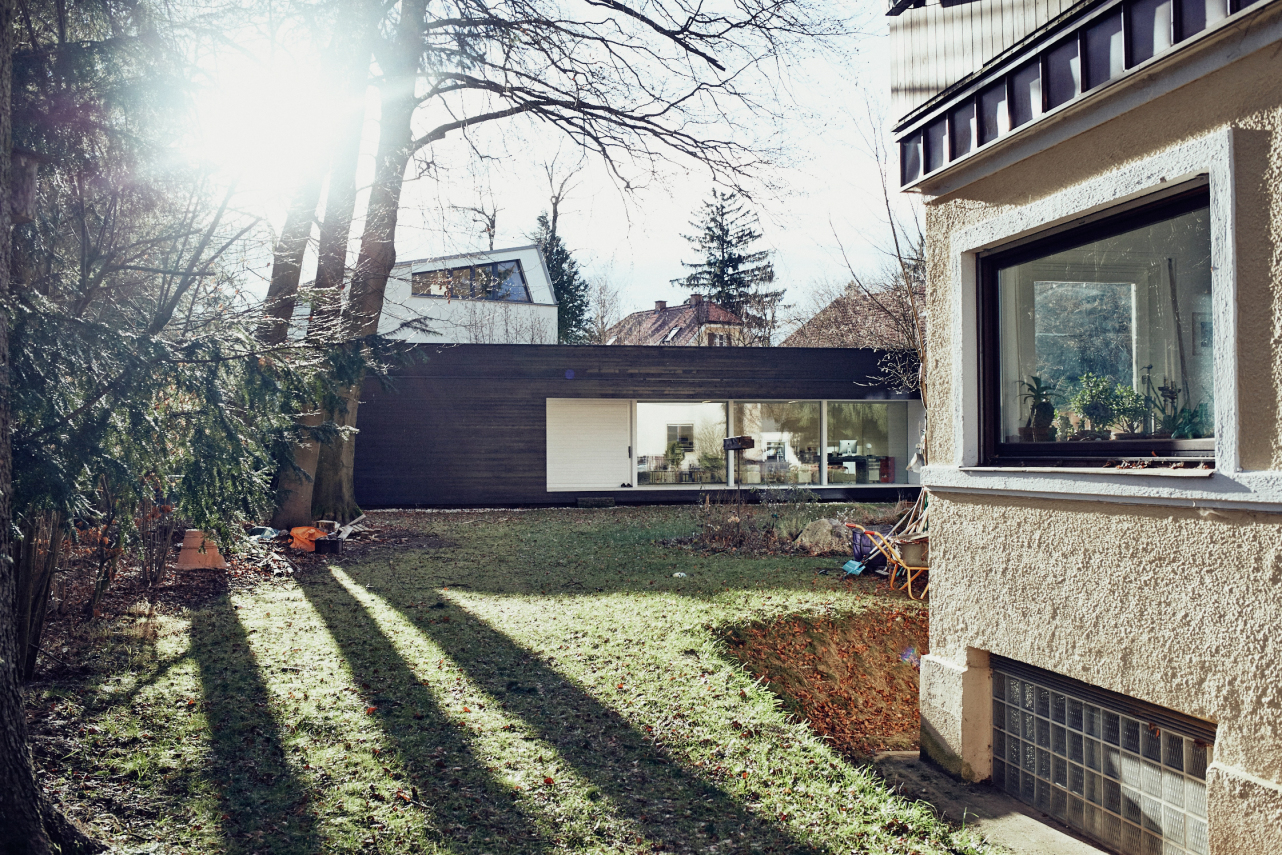 Thank you, Florian, for letting us explore your world of photography and visit your extraordinary studio. 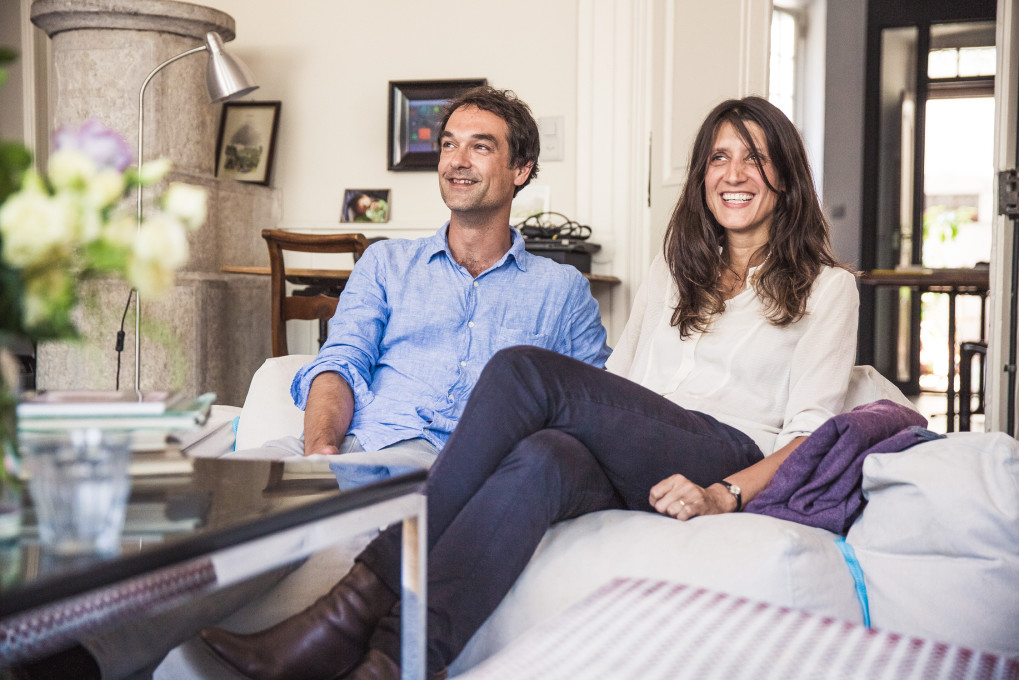 “The furniture pieces still emanate the optimism of the 60s.” 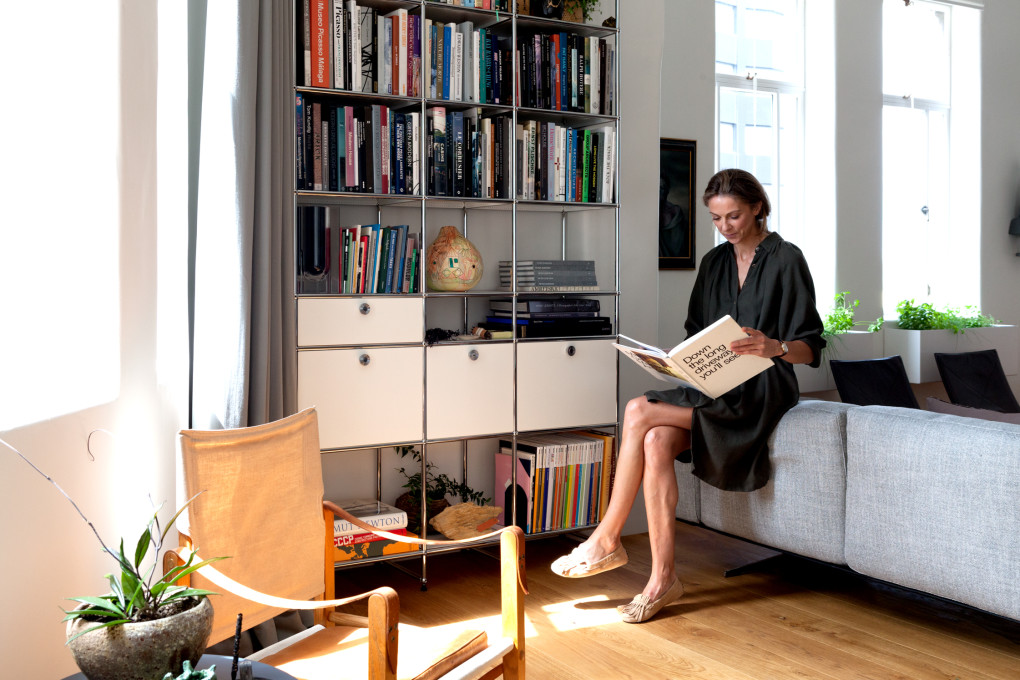